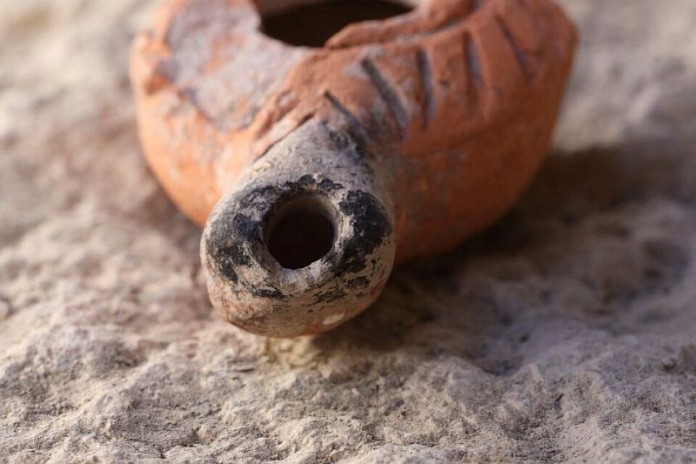 Oil lamp from the Hasmonean period.

Archaeologists made an exciting discovery in Jerusalem on the eve of Hanukkah: a 2,000-year-old oil lamp from the Hasmonean period.

The millenia-old oil lamp was discovered in an excavation of an entire house currently taking place in the eastern section of the City of David National Park, near the walls of the Old City of Jerusalem.

There is a hole in the center of the lamp in which the oil is poured. At the end of the lamp is another, smaller hole into which the wick was inserted.

Soot marks had accumulated at the bottom of the lamp, indicating the lamp was used, according to Israel Hayom.

“Although such lamps are not uncommon and have been found in quite a few excavations, it is definitely exciting to reveal as Hasmonean lamp in the City of David right on the eve of Hanukkah,” said Dr. Philip Wakosowicz, director of the excavation.

Oil lamps were commonly used in ancient times for everyday needs such as providing light in homes, but they were also employed for ceremonial use in kindling the lights for the Sabbath and Hanukkah.

Through various period there have been changes in the shape of the oil lamps; each period has its own oil lamps, which helps archaeologists to date the structures in excavations.

The oil lamp that was recently discovered dates specifically from the Hasmonean period and its discovery close to Hanukkah aroused great excitement among the excavation crews at the site.