A discussion on the Prometheus myth, and on Shelley's interpretation of it

I haven’t been posting too much on the forum lately, mostly because there is just too much ‘going on’ in the world re geopolitics and things are changing very fast…it’s hard to find stability in what we are living through, and my approach to this is more to follow as much as I can - including all forum posts! - and just digest things as far as possible. This one though is worth sharing IMO; Matthew Ehret and the Rising Tide Foundation is something I chanced upon a while ago, and together with Matthew’s posts on history and politics, I find myself devouring his content. This one is relevant to this Giza forum as it is referencing the work of Percy Shelley, as Dr Farrell does in his book ‘Transhumanism’. As someone who has had a personal experience in my mid 20’s where the ‘Universe’ spoke to me and proved beyond any rational thinking approach that literally everything is connected, and everyone is connected, united by a capacity for creativity based on love, or the concept spoken of in this presentation as Agape, I just find this discussion very ‘interesting’. Dr Farrell is often pointing to the need to preserve the culture, and I would be pretty sure he would find this discussion to be a good example of that. As the world tears itself apart in a war of ideas and technologies coming from the more materialist side of humanity - the ‘globalist’ cabal that has been with us forever - it is refreshing to find groups of people who really are immersed in and understanding of aspects of western thought and traditions (cultural history) that ARE worth preserving! In the end, for me at least, this is what the battle is really about. Comments welcome as always 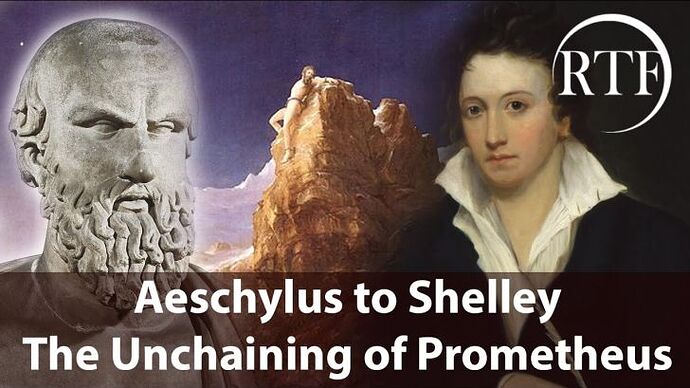 Two weeks ago, I moderated a lecture on the topic ‘Aeschylus to Shelley: The Unchaining of Prometheus’ By Daniel Leach. The full presentation can now be viewed here; Tonight as promised, anyone wishing to participate in the weekly Rising Tide...

I’ll add a bit to this post, as what follows comes from the above discussion, from the referenced writing of Shelley.
This was of course written about England, but to me it could be written about America and many other ‘nations’ of today:

’ The condition of England. The propositions which are the consequences or the corollaries of the preceding reasoning, and to which it seems to have conducted us are:—

The Malthusian Fallacy. A Reform in England is most just and necessary. What ought to be that reform? ’

That passage is taken from Shelley’s work, ‘A Philosophical View of Reform’, written in 1820. Here is the link for those who enjoy going to the source. I for one enjoy the content, but especially, I enjoy the language

This was a refreshing discussion to listen too. I am interested in myths and their impact on culture and history. This discussion introduced me to Percy who I have not known before. He is I believe a Divine follower and the poetry is beautiful. What impressed me was the beauty of the poetry and the divinity shining through but also the censorship prevalent in nineteenth century Britain. There was also the Globalist agenda being played out from the beginning of time.
There are some interesting lectures thank you for posting the video. It does connect with Dr Farrell’s work and his focus on myths, texts and scriptures. I look forward to a replyto a

This was a pleasant surprise. I appreciate the deep dive into the myths and the historical references to them.

Shelley’s words both stir and soothe.

His thoughts published in 1930, a hundred years after his death.

incredible indictment of the Bank of England, British East India Company evil, Thomas Malthus and so much more. You can download it on this link: https://oll.libertyfund.org/title/rolleston-philosophical-view-