These last few weeks, as I have listened to talks by JPF, and greatly appreciated them, I kept having nagging thoughts that it is important to remember Robert F. Scott, the explorer who made the arduous journey to the South Pole. Sadly, he and his team died on their way back. This has been a story of interest to me, ever since I was living in Chicago, during a very cold winter. I remember a few days in a row, where it was -26 farenheight. I had no car, so had to take the bus and transfer to an elevated train, to make the trip to a theater called, Wisdom Bridge, where I was an intern. The performance during that time, was based on the last journal entries of Scott. it was an amazing play. directed by Robert Falls. I never forgot the images, sounds, and words.

Tonight I had the time to look up the journals of Scott, and found a wonderful reading of them, by an English man. He recorded them in 2020, and at the end of Scott’s letters, (not linked here), reminded the listener of these difficult days, because of C O V.

We are all strong human beings. No matter our age, fitness level, income, or any other attributes. We are like Scott and his party. But we have many more options to secure our survival.

I wanted to share a link to the recording of Scott’s last Journal, of the final days in which he and his team bravely got up each morning and marched, towards a safe haven. The description of the surface of the frozen layers beneath their feet, was very interesting. It was a layered and wooly surface, he said. With odd crystal formations. Eventually, they could march no more. But they saw their end clearly. And they met it honorably. I think it is an important thing to remember this kind of march. Especially now. There has to be a simple understanding of what we are facing—of the clear components. Because otherwise we can become distracted by all the terrible gaslighting from so many corners of our ever expanding or diminishing world.

Scott and his party had the truth of each other. and this made their final march easier to see. They could make decisions. In contrast we are kept in a constant state of balancing between many worlds, of past and present, Some manufactured, all with multiple streams of intent. Scott and his party faced the wind, the snow, the cold, the frost bite, the end of fuel and food. It was logical and something they could decide for themselves, how they best should deal with it.

We need a way to have such clarity over our own serious circumstances. To have a map. To gauge the distance and compare it against our supplies and our strength.

I hope listening to Scott, and the reading of his last journal entries, by this beautiful voice, will help clear away some of the noise we are bombarded with. And on another interesting note, to think about what it was he and his men were near, on their journey. A world, near by. that only now do we have some hint of understanding that it exists.

I also wanted to share an image by a Seattle artist, related to Antarctica. l love her work. Patti Loper. 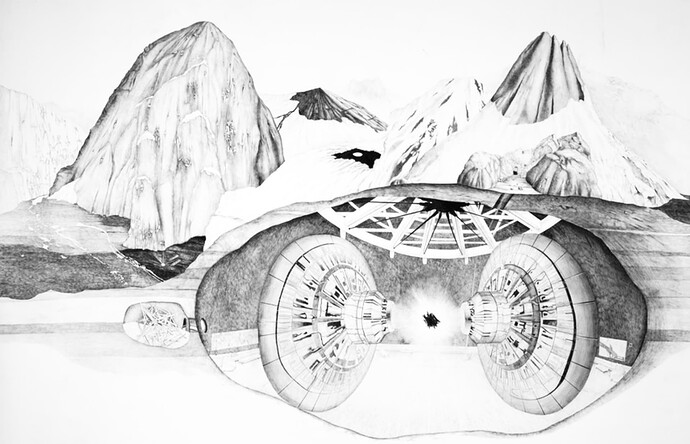 Sage advice on the importance of having a solid foundation and good grounding.
Thank you!