I’m reading: Charles Adams, When in the Course of Human Events

Hi folks, just a book title I though would interest people in the light of the Reichskristallnacht speech and the 9/10/21 vidchat. It’s a must read for those interested in this period of American history: Charles Adams, When in the Course of Human Events: Arguing the Case for Southern Secession It’s a book that in spite of its title goes into some little known nitty-gritty and details.

Anyways, I’m thinking of the women in my life. Attempting to tell them, “We Are At War.”

The sooner we agree it’s war, the better.

So I want to know more about the Southern Women during the American Civil War. What were they up to after the Pomp and Circumstance of glory wore off, and their men went away forever?

Unfortunately, the American Civil War narrative is matching our current situation too closely to ignore. (a fiscal quarrel of the elite)

Any good books about Southern Women during the American Civil War?

Also, I would be remiss if I didn’t add: How much longer are we going to allow this fiscal quarrel among the elite to inoculate us?

Dunno if you’re looking for fiction (I call it “faction” when it’s well researched) or nonfiction, but one that I learned a lot from (in the “faction” camp) is" The Oldest Living Confederate Widow Tells All" by Allan Gurganus. And, oddly enough, Gone With The Wind was educational too, for me. The woman who wrote it was relying on family stories and was brought up in the South and was a thorough Southern woman, albeit something of a rebel in the 1920s.

There is a series of books by Pulizer Prize winner, Conrad Richter, that covers numerous stages of pioneer life and the profiles of the women involved are really excellent. I remember Elizabeth Montgomery starring in a Trilogy with Hal Holbrook called, “The Awakening Land”. Although the trilogy was pre-Civil War and think it centered in Ohio, it showed the struggles this woman went through to preserve her family and their lives. I believe the mini-series might be on YT now. Richter has some good books on the subject.

The maneuvers of the civil war and the Kansas / Missouri skirmishes leading up to war are the theme and backdrop in Thomas Goodrich’s account Bloody Dawn – The Story of the Lawrence Massacre (copyright 1991).
While the focus is not on the women themselves, they pop up again and again as totally fearless - and superior in character to their men who at best, were frozen and cowed, and at worst abandoned their women altogether to fend for themselves under the most unthinkable of circumstances. The news accounts at the time hailed the unbelievably steely feminine grit that endured and emerged from that grizzly event.
People show what they are made of in the worst of times, and these ladies clearly emerge as nothing less than heroic iron maidens.
While the book’s text has some typographical and grammatical errors, it’s impossible to ignore human nature. Throughout the book, today’s reader will recognize both the eerie echoes of the past replaying in today’s current events, as well as dreadful foreboding glimpses of what may yet lie ahead.

There’s the Movie The Beguiled, but it’s a novel, and not based on true events.
I like the vintage Clint Eastwood version.

Mary Chesnut’s Civil War won the 1982 Pulitzer Prize for history. It’s quite the doorstop and I’m not sure if the Pulitzer is a plus or a minus, but it’s chock full of detail and minutiae and a woman’s viewpoint, albeit an elite woman of the time.

I don’t have a book on the US Civil War to recommend but I am a student of cycles in geopolitics and financial markets. I am a member of the Foundation of the Study of Cycles that was initially formed by Dewey but has gone through a few significant changes of management from it’s inception. As a person tracking the day to day cycles, my focus is on “time” The measurement of and the dates when things could happen. Predicting the future is no easy task. The problem with cycles is that it tells you when something is going to happen, but not necessarily what is going to happen. It’s sort of an art form that requires practice. 2nd disclosure, all those cycles that Dewey talked about and most financial and geopolitical analysts talk about, they are the synodic cycles of the planets. This is obvious to some, not so obvious to others. The synodic cycles contain very complex and sacred ratio’s. I always think this needs to be said rather than separate the cosmology, astrology and mathematical cycles, they are all part of the same study.

That being said, February 18-22, 5 months away, multiple cycles are converging that are anniversaries of the Revolutionary WAr. 2/22/22 should be a decisive moment, not just for the United States but the planet too. Between now and then, I can see the elite making the transition to digital currency.

Another date, I have on the radar is mid october. October 11. In the ancient science of numbers 11 is known as a master number 11, and 22 etc… Something big hits on that day but I’m working on the exact nature. Geopolitical violence is square and center. There are few days in October that look particularly bad. The details on how I derive these dates would take alot of numbers and weird looking charts so I’ll skip that exercise.

One of my teachers was George Lindsay. Well, not the man himself, but his books that have almost been all destroyed. Very few people know who he is. There is only one interview of the man on youtube, Wall Street Week Tracking the Dow & Predicting the Future - YouTube He predicted over 300 tops and bottoms in the market in a 20 year history and wrote a book called “The Other History” on how he predicted wars and revolutions and how he applied the same principles in markets to geopolitics. He was an outlier and I don’t know anybody today doing this level of forecasting. I’m still working through his material because I was able to get a copy of “The Other History”

Like I said, none of his writings are in circulation. It’s almost as if somebody destroyed them. There were two copies of this book that a couple of us located. One in a university library in Chicago. My friend got access and spent the day taking pics with his cell phone. So that’s my book recommendation on ascertaining if we are in a civil war. 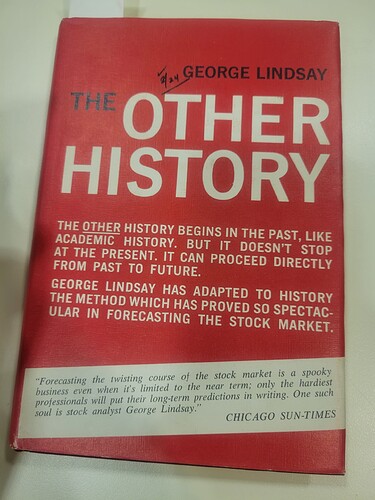 By way of introduction, (I already introduced myself on another forum) but I’ll add to it since I just appeared out of the blue. I’ve been on another geopolitical, finance forum for many years and it begun to deteriorate as sentiment is at an all time low. I remembered Joseph had a forum but when it started there wasn’t much participation so I thought I’d take another look. On my old forum, there was a saying, watch out for the new people that just show up out of the blue. (My own quote) But I realize it’s important to exchange information with like minded people, give feedback to others contributions, and share ones own thoughts. It’s not like attempts to take over the world and depopulate the earth happen every day. So while this is my second post, I’ve been reading, following and on occaision on facebook (some years back since I don’t log onto facebook) I did correspond with Joseph. By far, one of my favorite geopolitical and other world analysts. So I’m not really new, I’m back.

@reddclay How interesting! I have minimal studies on cycles, but as a gardener, I must know the basics. I hope you’re wrong about the digital currency, but no doubt they will try.

I hope you’ll start your own thread regarding cycles so everyone can distinguish the subject and not have to dig for it too much.

They have gardening calendars around planting on the cycles of the moon. Some people even trade markets off the cycles of the moon that were documented in many of the worlds great megaliths, Stonehenge, etc… Living in the city, I’m not a very experienced gardener but did get lots of tomatoes this year. Second year trying after watching lots of video’s Stuff is hard work.

I hope I’m wrong about digital currencies and the noodles storm that’s coming. There is some positives to make a long story short, we should be out of this mess by 2026. I’ll have to explain that another time. Long story.

Trying to time the transition into digital currencies is difficult. I’ve been reading all Josephs’ blogs on the formation of state gold depositories which got me working on the case. There are more monetary anniversaries happening in Spring 2023 so it’s more of a period of time than a date. March 2023 will be an anniversary. In 1797, the United States dollar became the nation’s standard unit of currency. Prior to this, the colonists issued the “continental,” paper money intended to unyoke them from the British monetary system. These type of anniversaries don’t go unnoticed. The effect of the outer planet cycles on society, monetary system was documented in a book called “Cosmos and Psyche” by Richard Tarnas (to throw out another book recommendation that might apply to an incoming civil war)

I’ll look around and chime in where I have something to contribute. Where I think something important is going to happen, I’ll be sure to offer my point of view which is just that, one mans point of view.