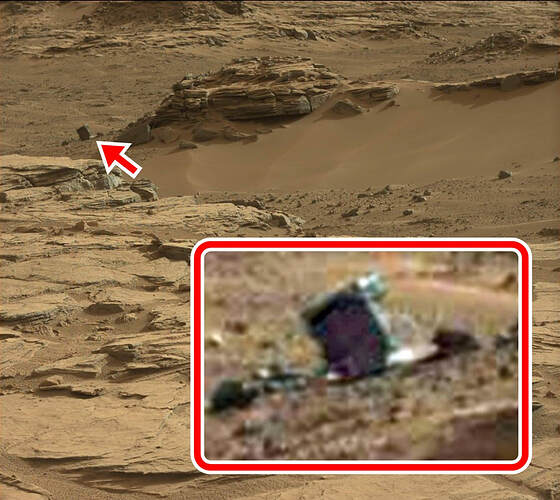 ​Most interesting object captured by the mars rover camera. The object has perfectly straight lines and looks like a box.

You might want to reign in the rhetoric a bit. Just sayin’.

this just points that we can buy clever trickster knowhow from nasa i.e. how by trickery one can get additional pie of the common budget, hm maybe “they” are using the same for some black ops while like this launder them easily!? what dont means rovers never reached the mars surface, but all footage to be genuine cmon just from security aspects in context of space race any wide public disposal of mars photos is questionable, if not else heavy retouching of the lower terrain is done!

but cant claim nothing till dont see somewhere extensive independent debate, tho always wondered who has such time to go over all what nasa released, at least to join the forces on some dedicated mars forum! [2][2][2] hm as if we were living in still in 19th century and dont have eforums to mobilize public will for investigation of that red dirt, yet this should be joint venture by amateur astrophysicist if not professionals so we would be unburdened from fakebook chitchat there, 21st century no its not possible, maybe someone stopped the time [3] or throwed us back