Electric cars have been around much longer than many people think. It’s not even a myth, just a cover-up of lost tech

This is Nikola Tesla’s 1921 Pierce-Arrow electric car, powered by pure etheric electricity. It is a self-charging car; it does not run on batteries, oil, or gas.
Electric cars have been around much longer than many people think. It’s not even a myth, just a cover-up of lost tech 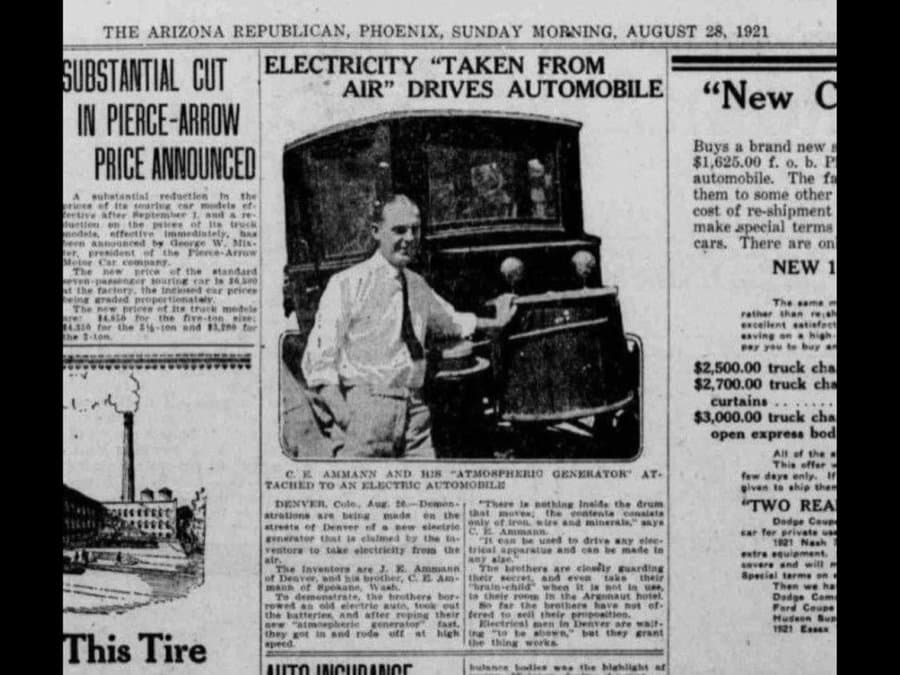 This lady is charging her Columbia Victoria Mark 68 in 1912. 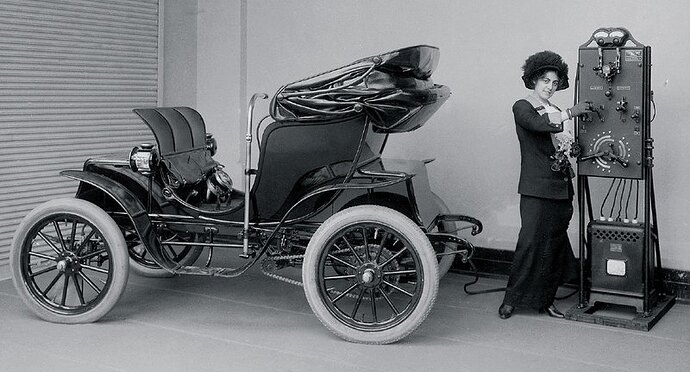 Technology of the previous civilization​

The very first electric car, supposedly, was presented by Siemens and Halske in 1882. And those early electric cars looked neat, but very primitive. It also appears that most body styles were derived from those available in horse-drawn carriages. And with all this visual simplicity, these vehicles had ranges we were only able to mass produce in the 21st century. Let us take a look at the battery powering 2010 Nissan Leaf which is equal in range to 1908 Fritchle Model A Victoria.

1908 Fritchle Model A Victoria had a 28-cell lead-acid battery weighing 400–600 lb. I was not able to find a picture of the Fritchle battery, but apparently it was powerful enough to tow an Oldsmobile. And the below letter of appreciation from a grateful customer speaks volumes. 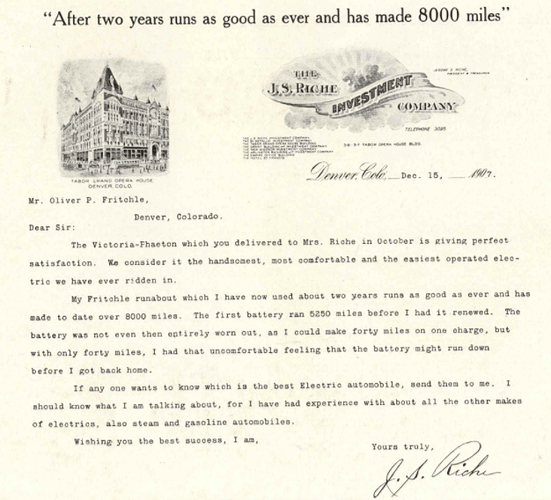 The Fritchle batteries generally lasted for more than 10,000 mi and could be replaced at a cost of US$208. The cars were advertised and trademarked as “100-mile Fritchle Electrics,” and they lived up to this claim. Another feature of the Fritchle was a regeneration system in which the motor became a generator when the car was coasting downhill, thereby partly recharging the batteries.

Those people from over a century back, with their extremely limited scientific base were able to achieve similar things we are enjoying today. Where did this “ahead of its time” technology come from? I do not believe there was sufficient time for the natural, research based development for this quality level of power storage in 1900. Such a sharp technological contrast between the simplicity of the vehicle body and the durability of the power unit, suggests different levels of development. It’s like the technology just fell into someone’s lap. Be it in a way of documentation, or a whole warehouse fool of batteries.

What about the infrastructure required for production of all these electric cars? The catalog above probably contains 5% of all the electric cars produced at the time. Just pick at the below list of Early Electric Automobile Manufacturers. And those are electric cars only.

Click to expand…
Ugly crooked wooden utility poles, and dirt streets next to beautiful Colonial buildings (not yet discussed) , ridiculous sails on gigantic 700 ft long iron ships, high quality pneumatic train cars replaced by benches on wheels, and many other things - all these are indicators of the unknown factor silently existing in our most recent past. The pneumatic train and electric car technologies quickly went away. Official reasons were similar: not profitable, not enough customers. Semi-official reason: gas sales bring more money. I think the real reason was that gifted technology without sufficient understanding is prone to being lost. They simply were unable to do anything with it.

It’s so easy to explain everything by an “Industrial Revolution” excuse. We were dumb and stupid for centuries, and all over sudden everyone got smart at the same time. And only these little big mismatches stick out. They are only visible if you look, for if you don’t, they are invisible. Well camouflaged by the fake historical non-sense they are. Our society prefers not to see all the contradictions hiding in the mysterious 19th century (and recent history in general.) I wonder why?

Truckers have been notified by the big truck stop retailers that they will be only allotted 50-75% of their usual diesel deliveries (starting now). This will mean even further restrictions on consumer goods and manufacturing. Truckers believe that this is all an effort to move us to electric vehicles- including long haulers. More like a way to further ruin the economy and turn us into Venezuela. Environmentally, it is INSANE.

I have had a strange feeling that they want to replace truckers with electric driver-less trucks. Elon Musk will come swinging in to offer that solution. I can’t prove it. But it would make sense from the standpoint of Hegelian Dialectic, and furthering our ‘overlords’ goals.

I may be crazy though. It is very late right now where I am. 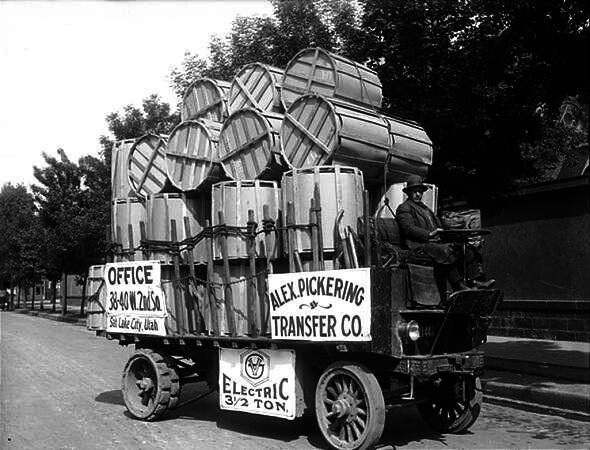 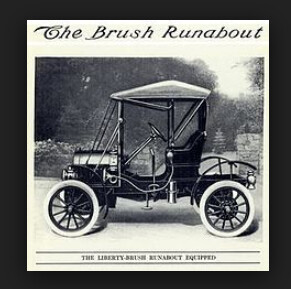 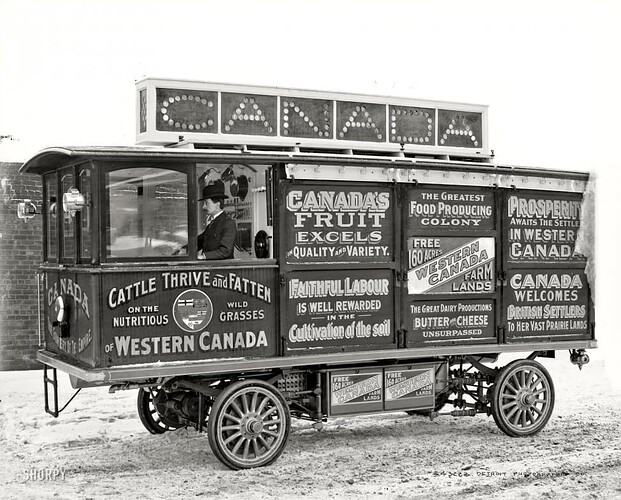 Another controlled demolition?
By the way, it was the Rockefailures who sabotaged[blew up]the electric factory. Competition was a sin, after all, and the electric vehicle was challenging the Rockefailure’s combustion engine.
Today, they just use the government to keep monopolies strong.
It helps w/maintaining inflation; while destroying and/or buying up threatening[read competitive] small businesses.
Besides, a rentier economy[read monopoly] can’t compete in any true global market place.
This is but one, of many, tell-tale totalitarian government Twilight Zone signs coming to the fore.

We. aren’t going to get even close to that. I.agree with Gonzalo Lira- the entire globe is going to experience a revolution as people in the west get HUNGRY. Most Americans have absolutely no idea what that means. Maybe the shocking news confirming the treason will spark the action.

Thanks for these history lessons, @ColonelZ !

That is strange spacespeare, Who will pickup and deliver the electric cars if there are no truckers? Just curious?

Would love to see the links to this conclusion? Where is your source?

I suppose someone will have to load and unload them, but as far as the drivers, I bet you they would like to eliminate that element. As I said, I may be crazy. haha

I hauled new cars for over 6 yrs and can say — RIGHT!!! Electric cars especially the Prius/hybrid really sucked to load because of the unpredictable delay in braking. I believe the truckers will go once humanity has been destroyed. They are working on it!

@GreenMountainHB I appreciate your perspective as I have traveled a LOT across the country (visiting family, moving horses, sheep, etc.) and consider truckers my friends- especially at night on long hauls. IMO, all this push to the removal of the human from the equation is a WEF pipe dream. The world is about to change fairly dramatically and it is NOT to a transhumanist world- maybe in some cities, but not universally. I believe trucks will be even more like flying airplanes but you still have to make computer error corrections, pick up and deliver (take-off and land).

The Russian insurgency in the Ukraine is a turning point. We have identified the enemy and soon the majority will see it, too.

(Forget the 30% who will never get anything truthful!)

10-4, I would highly recommend watching my recent post on Elana with perhaps a bag of popcorn and a bottle of wine!! I was going to go to her last lecture and the sponsor contacted me that she had to cancel due to the fact she was targeted with a DEW which persuaded her to end the tour. We may be watching a show set by the globalists regarding Russia…

How about James Corbett’s DVD’s on Big Oil??!!

Elana is to be at The Red Pill Univ. in Indy during July!!

In Giza Only section

That’s not the Only thing they COVER UP— Tesla crashes into truck; feds investigating - Land Line