Its a question of time? Sumerian godheads with quantumhelmets?

The title is - maybe - just for the hype, but many times i wondered about days of old and the ‘big guys’ equipment list. Its clear that their weapons were ‘magic’ - hard science - and we know the stories of the ever-raging war(s). Many pages were written about planetkiller tools in several books, many hours of movies, videos filmed. But since man cannot read evereything and is bound to forgetfulness, somehow i missed the lines, minutes over their headgears, helmets, caps, tiaras, as you are able to see in many pictures. 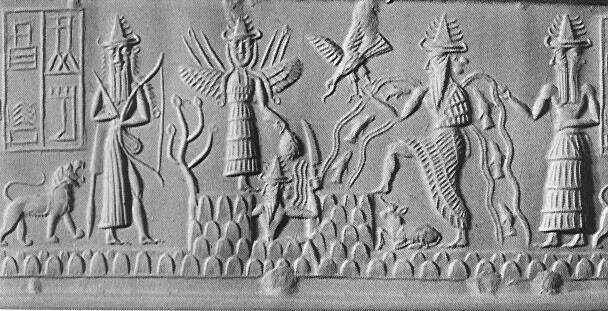 Partying
Akkadian Cylinder Seal of Adda (c. 2250 B.C.) with, left to right, Ninurta, Ishtar, Shamash, and Ea. From Dury, Art of the Ancient Near and Middle East, Abrams, NY 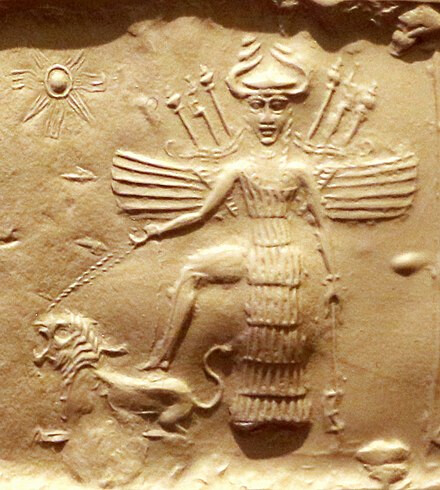 for more and a little ‘authorative’, but nice compilation which does not answer my questions. 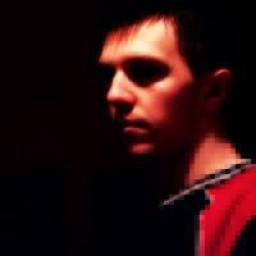 we possibly know of the spacesuit helmets, and war armaments, but these crowns or caps for everyday use are seemingly somewhat other. or maybe they just appear as programmed or morphing between states? who knows? surely some do.
and what are those antennae? why three pairs, why four?
2 in 1 realitybending enhancers and personal mindshields?
is it like putting the canary into a golden double wirecage of cornucopia shaped nanowirestorms coalescing into the main axis thrice or fourfold - and puff: instant samadhi - and let it shriek?

but they are surely(?) non-invasive technologies.
so who has some bright ideas about this mates?
do we have operating ironman helmets somewhere in the basement or what?