Washington State Ferries (WSF) is embarking on an ambitious initiative to begin the transition to an emission-free fleet through a hybrid electric ferry system. Currently, WSF operates the largest ferry system in the United States. It is also the biggest contributor of greenhouse gas emissions of any state agency in Washington, burning 19 million gallons of diesel fuel to support 24 million passengers every year.

This shift to hybrid electric ferries is in response to governor and legislative direction as well as in alignment with the agency’s own long-range planning initiatives. To transition to a hybrid electric fleet, WSF is working on the three key elements of the electrification system – building new vessels, converting vessels, and electrifying the terminals.

The Request for Information for a new design-build contract for five hybrid electric Olympic Class vessels is now closed. Check the “What to expect” tab to learn more about the upcoming Request for Proposals.

The Request for Information (RFI) for a new design-build contract for five hybrid electric Olympic class (HEOC) vessels is now closed, but can be viewed at the Washington State Ferries contracting website.

In March 2023, we plan to solicit bids from shipyard partners to convert three Jumbo MKII vessels to hybrid electric propulsion.

With new funds from the 2022 Move Ahead Washington transportation package, and other previously secured funds, WSF has now secured $1.33 billion in funds to:

This investment is critical to the health and sustainability of the state’s ferry system.

WSF has nearly completed the functional design for the HEOC, through a contract with Vigor ship builders. This design work will be the basis for construction of five new vessels, each with capacity for 144 vehicles. WSF will seek competitive bids to build the HEOC vessels. For these new vessels, WSF believes that this bidding opportunity, along with plans for 11 future vessels, will generate considerable interest from the maritime industry to build these vessels in Washington state. WSF is poised to launch this Request for Proposal process in summer 2022. We look forward to securing a partner to work on this exciting project and build five new hybrid electric vessels in the state of Washington as soon as possible.

WSF will solicit competitive bids in March 2023 to convert the three Jumbo Mark II vessels to hybrid electric. Our team estimates that the converted Wenatchee will begin service in 2024, with conversions of the Tacoma and the Puyallup to follow.

WSF continues to work with multiple utilities that provide service to the terminals. Initial engineering and design are underway to build the necessary infrastructure to charge the vessels.

For a primer on WSF’s electrification efforts, please see this video: 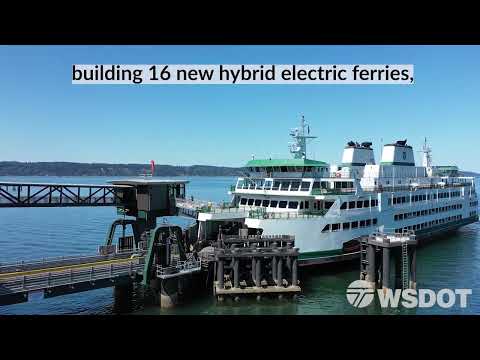 For a more in-depth look at our ferry electrification efforts, watch the extended video. 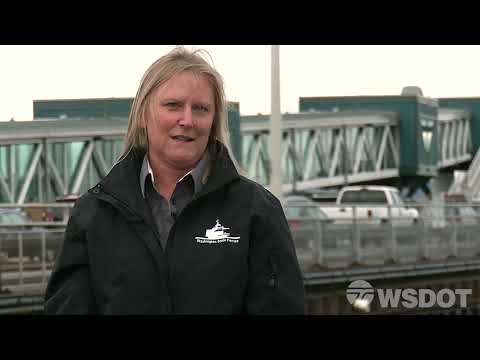 Washington State Ferries (WSF) is embarking on an ambitious initiative to transition to a hybrid electric ferry system. This transition will improve local air quality and reduce greenhouse gas emissions 76% by 2040.

This month, WSF released a Request for Information (RFI) for the construction of five new hybrid electric Olympic Class (HEOC) vessels. Interested firms were able to submit voluntary responses before 5 p.m. on August 29, 2022. WSF expects to follow the RFI with the Request for Proposals (RFP) in October.

These new vessels, along with plans for 11 additional new vessels and 6 converted vessels, are required to be built in Washington in accordance with state law. To encourage collaboration among existing and future Washington maritime firms, WSF will co-host an Industry Day with Maritime Blue on October 6, 2022, in downtown Seattle from 9 AM to noon in advance of the release of the RFP.

Matt von Ruden, WSF’s Electrification Program System Administrator commented, “The release of this RFI is an exciting milestone not only for our electrification efforts, but for the maritime industry as a whole. We look forward to working with new partners to support the development of a greener maritime industry here in Washington state.”

The implementation schedule below shows the electrification of terminals and vessels by routes. This schedule was updated in July 2022. All dates are subject to change and are dependent upon additional funding. 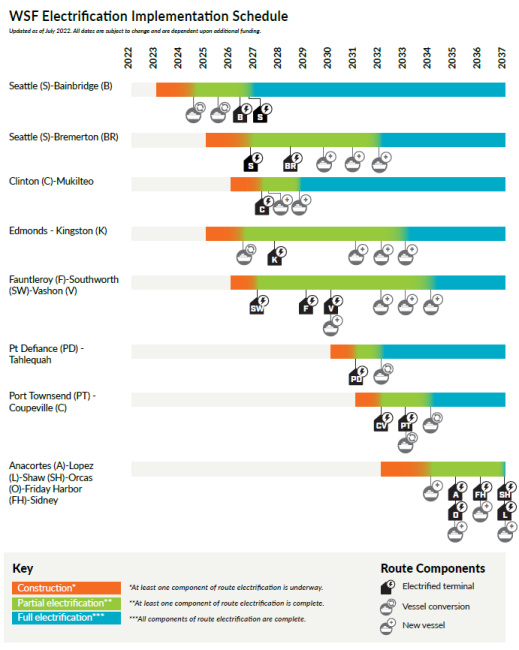 The program is currently funded at $1.33 billion from grants, state, and federal funding. The newest, and largest, investment of $1.03 billion is from the 2022 Move Ahead Washington transportation package. The program still needs an additional $2.37 billion to be fully funded.

WSDOT and WSF are pursuing a number of additional funding opportunities at the federal, state and local levels to advance the electrification program for both vessels and terminals. To date, WSF has been awarded grants to support the conversion project including $35 million from the nationwide federal Volkswagen settlement, a $6.5 million Congestion Mitigation and Air Quality Improvement grant and a Marine Highway Project Designation and grant award of $1.5M.

We’ve been planning for ferry electrification for years. Both our 2040 Long Range Plan and System Electrification Plan have paved the way for how we’ll transition to hybrid electric. These documents have also been closely informed by specific requirements from the Washington State governor and legislature, outlined below.

Our 2040 Long Range Plan (PDF 11.4MB), which was delivered to the Legislature in January 2019, recommends short-, medium- and long-term actions for WSF to pursue and focuses on a set of investments and service enhancements to be implemented over 20 years. One of the key recommendations is to move toward a “greener” ferry fleet with the goal of a reliable fleet that has a lighter footprint on the environment and outperforms carbon dioxide reduction targets. These goals were captured in the System Electrification Plan (PDF 4MB) in Dec. 2020.

We developed a System Electrification Plan (PDF 4MB) that expands on the 2040 Long Range Plan (PDF 11.4MB) to evaluate alternatives and propose an efficient strategy for using hybrid electric vessels throughout the system. The plan was delivered to the legislature in January 2021.