Joseph P Farrell and Michael Shrimpton from the Nazis to Roswel, kennedy to 9/11 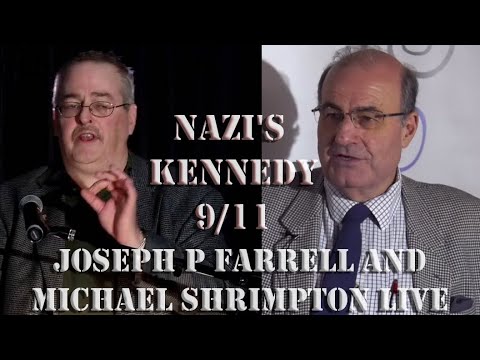 It was the Olympic.
But, you won’t convince the stiff upper lip to to sync w/reality.[13:47 in] .
Got to keep your intelligence job/connections; which is in keeping certain narratives on historical track and in the recorded appropriated grooves. So JP Morgan doesn’t turn out to be a villain, after all. Still, I do like his industrial-strength German intelligence knowledge base - it’s wickedly cool. He wants to control the narrative, in the groove, on track and quite, quite British.

Dr. Farrell gets into the ramming conversation and the interview gets moving forward

Then gets in the Ukraine missile in Poland… Vietnam…Bush 41…FBI Ruby…
Martin Bormann mastermind of Kennedy assassination?

Excellent!
Back on track.[not the sound track, mind you]
Great interview!

lol… I know, but there are those that just will never look at the other evidence for the Olympic theory, nor, frankly, for the rebuttals of that theory. All said and done, I’m on the Olympic theory about 60/40 or maybe 55/45…

I’m solidly in the Olympic camp; but, appreciated his German intelligence, blitzkrieg of counter argumenta. Shakespearean, in that “he” protests too much[yes; technically she, but on one count]

this Shrimpton guy is just not able to listen to other people. always interdicts, interrupts with bits and teases. pure attorney conduct.
very annoying.
i hope he reads this.
and i am only into the 41st minute…

Don’t know about the dog, but I do see some resemblance in inquisitive lifestyle Tino!

@kalamona
Normally, Americans are full of themselves, but today the Brits got them beat and took over that baton!

i think this Michael guy seldomly gets a forum of conversation, so he is happy to chatter through. Doc stops him later and gets things straight. thankfully.

but he has some gems of British humour one must admire:

“Gehlen was so dumb, you could have put him in the charge of the FBI.”

I love it when Dr. Farrell returned and gasped that he didn’t know he was going to spend the afternoon with MI6! Yes, Shrimpton enjoys hearing his voice but he definitely has a LOT to say and most fascinating. Thanks, Dr. Farrell and Tino. Great conversation… and kudos to you for have the chutzpa to present these ideas!

Some odd statements around 1:06:00. A head wound not found on Oswald’s body? Sounded like Timo said Ruby hung himself after talking to a psychiatrist? I’ll go back but I swear that what I took from it. Did I miss something since 1963?

This discussion really needs a follow up, if not several!

Officer Shrimpton may come across as a bit of a presenile windbag, however, those qualities are de rigeur for counterespionage.

i have a good friend with such outstanding qualities. he just simply freaks out of the past.

The guy was out of a movie, Mike Myers playing a spy.

To this day, I was 13 in 1963 and they let us out of school to watch the funeral, I will hear the cadence of the drums as they went down the street.

This could have been a much more enlightening interview except for the incessant sidetracks of the 'shrimp. A nice guy for certain, and full of humorous stories, but which are totally offtrack.

Michael Shrimpton (born 9 March 1957) is an English former barrister and judge who is known for his conspiracy theories and hoaxes. He was convicted in 2014 for falsely reporting that Germany was planning a nuclear attack on the 2012 Summer Olympics. Shrimpton studied at University College, Cardiff (now Cardiff University) and was called to the Bar by Gray's Inn in November 1983. He practised law as a barrister and sat as a part-time immigration judge. In 1998, Shrimpton chaired the Rolls-R...

Well this Michael Shrimpton looks more like some version of Johnny English to me.
You know the one who works neither for MI5 nor MI6 but for MI7!

Funny at times, full of humor and jokes, but still dangerous and deadly!

But i dont’t know.