Look Up! DARPA MOTHERSHIP SWARM:Bringing thousands to millions of drones to our skies;Motherships can be land, sea, or air based DARPA test flight of a C-130 Hercules deploying drones:SQ PEOPLE DON’T UNDERSTAND HOW LETHAL MINI DRONES CAN BE

We are not being invaded by aliens from another world, but an invasion is taking place in the skies above us. Drones have captured public fascination for two centuries beginning with dirigibles and balloons. Recently, Defense Advanced Research Projects Agency (DARPA) did an experimental test run of GREMLINS, a Mothership that releases drones and then recaptures them for reuse. This is the 21st century battlefield and you are the target. Ironically, the name mothership originates in the 15th century from motherhood, conduct of a mother. I certainly would not want a mother with lethal character flaws. One only needs to watch Slaughterbots to see these drones potential. This video shows only one drone; ponder the threat of a million-drone invasion.

An X-61 Gremlin drone and a C-130 undergoing a flight test by DARPA at Dugway Proving Ground in Utah on 29 Oct. 2021. During the flight test, three drones successfully carried out all formation flying positions and safety features before one was successfully recovered in midair for the first time. / Source: DARPA image via Defense News

A drone swarm mothership is an unmanned or manned system that transports the swarm to the battlefield. If a military wishes to bring thousands or even millions of drones to the battlefield, a mothership is almost certainly necessary. Since millions of drones take up a lot of space and cannot all fit in the bay of an F-35 or the hold of a destroyer, they will be scaled to an extremely small size.

In today’s circular economy where everything must be recycled, each drone will need to be refueled, repaired, and rearmed. This is where current researchers are exploring the use of a mothership, which can serve all those functions.

A mothership is a single platform that provides transport and other services to maintain the drone swarm. These drones can support surface and subsurface operations. Motherships can be networked together to enable coordination among the drones to ensure drones from one carrier do not interfere with the operations of another. 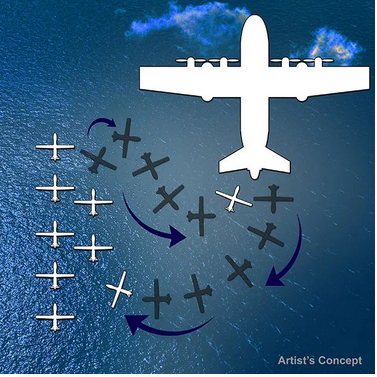 The military is currently evaluating threats and friendly applications for increasingly large drone swarms, and how best to protect and target motherships. If the mothership is destroyed, all the drones it contains and supports will be destroyed too. A drone swarm mothership operating on land, in the air, at sea, under the sea, or in space presents essentially the same challenge as an aircraft carrier but only at a lower scale. Thus, how do you protect a big, valuable platform? 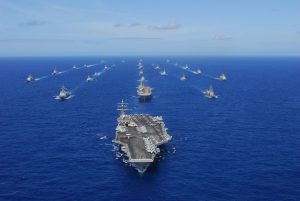 Drone motherships must necessarily be significantly larger than the component drones it carries. Protecting the mothership is functionally equivalent to protecting any large platform. Protection is afforded the mothership, which has stealth capabilities, such as camouflage or reduced radar profiles. This is common these days with the incorporation of graphene in autonomous, aerial vehicles that have seemingly magical qualities. In addition, as with an aircraft carrier battle group, the mothership might also be incorporated into larger groups of manned and unmanned systems that can provide support, such as air and missile defenses.

An important question to ask is whether the mothership should deploy drones capable of countering potential threats. This will depend on the type of drones, their payloads, and how quickly they can be deployed and used. Drone swarms can, and already do, operate across multiple domains.

All motherships will be vulnerable to electronic and cyber-attack. Motherships must have some way of communicating with the drones under its command. At the bare minimum, the mothership must emit some form of signal — passive or active — so the drones within the swarm know where to return to. An adversary may seek to disrupt the signal or provide fake signals to separate the swarm from its carrier. Any autonomous or other control systems within the mothership may be disabled, manipulated, or otherwise corrupted.

An adversary may seek to disrupt the signal or provide fake signals to separate the drone swarm from its mothership.

To the degree that drone swarms are important parts of the future battlefield, mothership concepts are likely to become increasingly prevalent to manage the complexity of these battlefields. The United States military is exploring different concepts of motherships in partnership with DARPA, varying both the nature of the platform and the type of drones included. As researchers explore the mothership design, they are critiquing:

SUMMING UP THE AERIAL GREMLINS

With every passing day we must consider the ever-increasing threat in our skies. Low orbiting satellites, drones, autonomous aircraft, and various other technologies that we are not yet aware of looms overhead. Not only is the sheer number of drones being considered for deployment troubling, but we must also consider the fallout of drone collisions. If these drones carry frequency weapons, what will be the impact to biological life as we are immersed in what is already a toxic electromagnetic soup environment?

What is the solution? It would be nice if we could just wish the mothership and her drone babies away, but prayer is the most powerful protection that you have. Through prayer you can be made invisible to this technology, protected, under the shadow of the Almighty.

May you always be hidden under the wings of the Most High,