“Mass formation psychosis” is not an academic term recognized in the field of psychology: Reuters 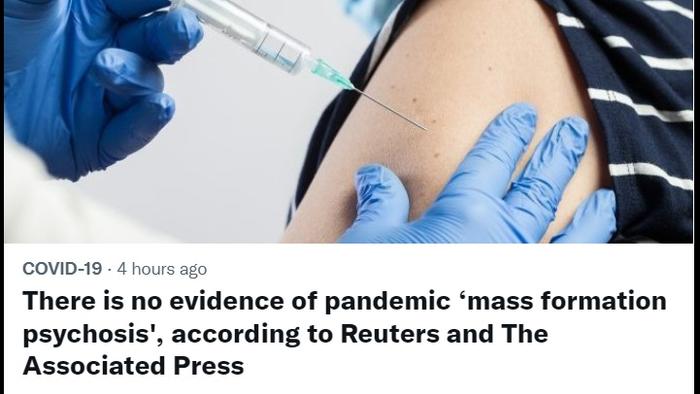 You Know Global Elites Are Triggered When The Propaganda Institutions...

... if this ain’t the biggest revealing tell in years...

Well, two things: first not real sure about Mcough and ML as interviews continue??? Two, and this is the big one: the non-physiological is found in Eph 6:12

Whoa, moved me to look up Eph 6:12.
The evil message conveyed by the messenger is the point, not the messenger. Heed and seek the armor of God as the counter strike.

Ups I’m not sure what you mean by

first not real sure about Mcough and ML as interviews continue???

What are you not sure about?

For me the point was, that the Reuters and AP “answers” were like a 5 year old child denial.
This “mass formation psychosis” is obvious to me, and so I found this denial is completely hilarious and ridiculous…

Opps. Looking beyond what is in focus to what is blurry in the background, yet still part of the whole picture.

And what is in the blurry background yet part of the picture? Please share.

I think we must avoid to try to understand “the full picture”, that would just drive us mad!

Instead, I like to think of Tolstoi’s “War and Peace”. There he describes the Napoleonic against Russia war as a big movement from West to East and back; how the orders of the generals could not be followed because of the changed situation; how the Russian could not avoid Napoléon entering Moscow; and that it did not matter who put the fire in Moscow, as it was just the beginning of the movement backwards. Everybody would just use all means attacking the French invadors who would completely collapse on their way back…

So I think about all kind of ill-informed people, traitors, people changing side, slowly awakening or any kind of controlled opposition in this way: the movement back has begun.

I see and agree. Kinda like when one thinks of suicide after contemplating all of life’s circumstances at once.