There is finally a growing consensus that unexplained aerial phenomena may represent national security risks. 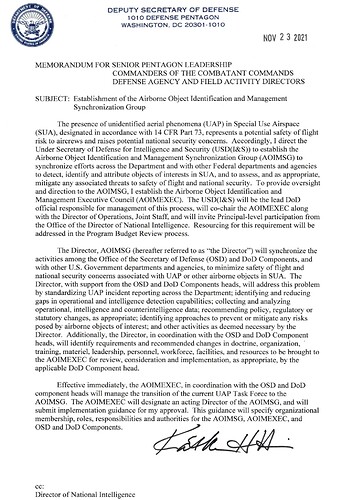 “The AOIMSG will synchronize efforts across the Department and the broader U.S. government to detect, identify and attribute objects of interests in Special Use Airspace (SUA), and to assess and mitigate any associated threats to safety of flight and national security,” according to an accompanying press release. “To provide oversight of the AOIMSG, the Deputy Secretary also directed the USD(I&S) to lead an Airborne Object Identification and Management Executive Council (AOIMEXEC) to be comprised of DoD and Intelligence Community membership, and to offer a venue for U.S. government interagency representation.”

Per the Federal Aviation Administration, Special Use Airspace “consists of that airspace wherein activities must be confined because of their nature, or wherein limitations are imposed upon aircraft operations that are not a part of those activities, or both” and includes, but is not limited to, “warning areas, MOAs [temporary military operations areas], alert areas, CFAs [controlled firing areas], and national security areas (NSA).” A significant number of publicly known UAP encounters reported by the U.S. military have taken place in warning areas off the coasts of the contiguous United States.

“Incursions by any airborne object into our SUA pose safety of flight and operations security concerns, and may pose national security challenges. DOD takes reports of incursions — by any airborne object, identified or unidentified — very seriously, and investigates each one,” the press release about Hicks’ new memo continues. “This decision is the result of planning efforts and collaboration conducted by OUSD(I&S) and other DoD elements at the direction of Deputy Secretary Hicks, to address the challenges associated with assessing UAP occurring on or near DOD training ranges and installations highlighted in the DNI preliminary assessment report submitted to Congress in June 2021. The report also identified the need to make improvements in processes, policies, technologies, and training to improve our ability to understand UAP.”