So why did Epstein then give money to the Stockhom business school(Wallenberg funded) and Barbro Ehnbom who worked as a door opener in New York together with his sister Karin Ehnbom-Palmquist, who is a Swedish diplomat. The latter has been the general secretary of the organization Swedes in the World since 2008.

Maxwell then bought 3/4 of the Butterworth Springer, while the remaining 1/4 was bought by the Jewish scientific adviser Paul Rosbaud. They then changed the company name to Pergamon Press. The sale was mediated by prominent Jewish banker and MI6 agent Charles Hambro, according to British journalist Stephen Dorril. Hambro “acted as head of the” British Commodity Mission "in Washington, DC,

Hambro had extensive business ties to banking dynasties such as Investor and the American Morgan banking family, which opposed Kreuger, after training at JP Morgan’s Guaranty Trust Company in New York, where he and his wife lived with Henry Morgan, founder of Morgan Stanley.

Edison is credited with inventing the first X-rays, voice recorders and films, but all three were plagiarized by European inventors: the X-ray was invented by the German researcher Wilhelm Rontgen, the voice recorder by the French bookseller Edouard-Leon Scott de Martinville, and the first film image of the French inventor Louis Le Prince. (Did Thomas Edison steal inventions?)

So what do the underlying links between Investor, the intelligence services and Ghislane Maxwell look like? We simply have to go back to her father Robert Maxwell and his activities and connections with Hambrobanken, the bank which was thus started by Enskilda Banken, (Wallenbergs bank) among others - which are completely indisputable indisputable circumstances in substance!

But we therefore start a little in the Hambro family because all this is long-term planned and parallel to the course Sykes-Picot, Balfour and Freden in Lausanne. The Wallenberg family was not exactly on the side of this …

After serving and training in the US bank Guaranty Trust Company, Charles Jocelyn Hambro soon became active in the family business and contributed greatly to the 1921 merger and the founding of Hambros Bank. Between 1928 and 1937 he was active in the management of the Bank of England, the British National Bank.

During World War II, CJ Hambro was hired by the Special Operations Executive (SOE) and soon became its chief. In 1943, however, he resigned due to disagreement over operations in the Mediterranean. He was then assigned to oversee the Manhattan Project on behalf of England.

During the war, the children were Hambro for a long time in Sweden with the Wallenberg family, where they then for a while grew up together with Marc Wallenberg and Peter Walllenberg. By the middle of the war, however, he moved to the United States and the Morgan family.

Under the leadership of Charles Hambro (CEO of the bank from 1959), the bank became one of the most important investment banks in Europe after expanding to several countries, including a number of tax havens.

The bank participated in the rescue operations of the crashed corporate empire Slater Walker in the mid-1970s, but also had its own problems. The problems arose in many ways due to the family’s and the bank’s relations with the Norwegian shipowner Hilmar Reksten.

In 1986, however, the bank’s winding up as an independent family bank began. That year, the family foundation, Hambro Trust, through which the Hambro family controlled the bank, was dissolved.

During the 1990s, the bank had problems and in 1998, the banking business itself sold Hambros Bank Ltd by the parent company Hambros PLC to the French Société Générale.

This part of the business was renamed SG Hambros Bank & Trust Ltd. The offices in London, Jersey, Guernsey and Gibraltar as well as a subsidiary of Coutts Bank in the Bahamas became part of this business. The parent company Hambros PLC was sold to South African Investec.

For many years Charles Hambro was at the helm of the Conservative Party in Britain. He was these treasurer and saved the party from economic collapse in 1992. After that he got British nobility and became Baron Hambro.

Jocelyn Hambro’s three sons all became active in the family bank, but followed their father when he formed a new company in the 1980s and handed over the bank to another family branch (see above).

He has previously owned a company called Rupert Hambro & Partners Today he is active in Robinson Hambro and has a number of board assignments in various associations and companies.

Richard Hambro (1946-2009) was for his part a board member of Hambros Bank from 1979 and of JO Hambros Investment Management from 1986. This family-owned company was sold in 2000 to Credit Suisse. In his first marriage, he was married to Charlotte Clementine Soames (1954-), granddaughter of Winston Churchill.

The third brother, James Hambro (1949-) was from 1979 a board member of Hambros Bank and in the years 1994-98 CEO of JO Hambro (JOHCM, JO Hambro Capital Management)) in 2011 he sold control of the company to the Australian BTIM.

Other younger members of the Hambro family today own a number of smaller finance companies. The connection between Wallenbergs and Hambros has survived to the present day.

SEB still invests money in JOHCM’s funds. Today, James Hambro seems to be active in the company James Hambro & Partners, in JOHCM and sits on the board of Hansteen Holdings PLC, Primary Health Properties PLC with several companies.

Among the more prominent from the Norwegian branch we find Carl Joachim “CJ” Hambro, who sat in the Norwegian Nobel Foundation (Peace Prize) from 1940-1963 and as a delegate to the UN from 1945-1967.

Robert Maxwell’s relations with the Russians and the KGB were not were simply social. Raymond asserted that, 'either willingly or unwillingly, Maxwell compromised himself with the Russians. He cited a KGB claim that Maxwell signed a document which promised to assist the security agency if needed … 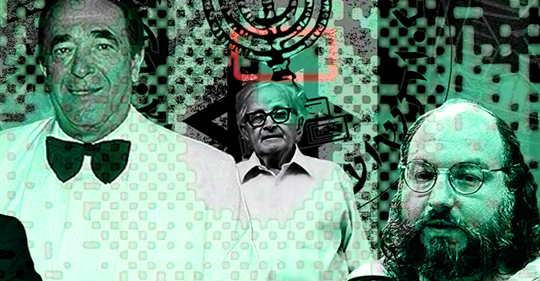 I found his choice of series to compare funny and very not random.