Russia To Declare War with the US/Nato

Russia To Declare War with the US/Nato 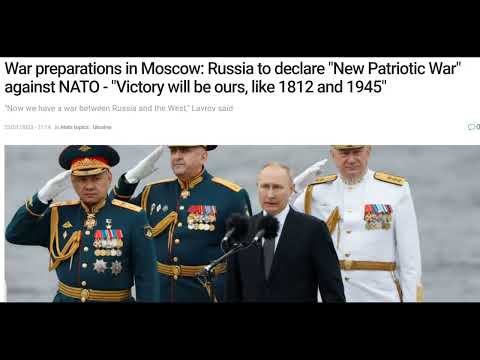 Most folks do not remember that in the 15th century Empress Catherine the Great had the Russian army drive the Turks out of all the Eastern European nations, including the Ukraine. In the treaty that settled the end of the war the Russians also paid the Turks the equivalent of 17.8 million dollars. In exchange Russia gained control, and governance over all that territory East of the Dnieper River. That includes the Ukraine.

The Maidan Revolution occurred after Russia loaned Victor Janovich enough money to pay off all of the loans the Ukraine owed to the Western Banks. The Ukraine never paid any of that debt because the Maidan Revolution toppled the democratically elected government and replaced it with Western backed saboteurs,

Russia went to the IMF court seeking a repayment of the Ukraine’s debt and the IMF ruled in Russia’s favor, and against the Ukraine. So, since the Ukraine nation still owes that money, plus interest, to the Sovereign Central Bank of Russia what we are witnessing is a forced Foreclosure because the Ukraine refused to repay its legal debt.

Nice piece of apologetics on behalf of Kremlin. If it only was the truth.

Aid to Ukraine: $3 billion from IMF, EU or US may go to Russia (cnbc.com)

War is tragedy, as farce?

According to French President Emmanuel Macron, the continent must decide whether it wants to be free or a "vassal" of China or the United States

And there we go; Admiral Kirk[ = lit. “The church”]'s solution is cyberwar, changing the subprogram in his favour. You’re seeing it happen, right in front of your eyes, right now( or not), if you are astute.

Hard to discern the entire Truth even when you read all the news, talking points, or listen to everyone involved which includes Vlad. What is needed is to consider the actual INTENTIONS of the Russians, and that they are ‘all-in’ on restoring their homelands.

What few folks are understanding is the BRICS nations, and all the other countries who want to join BRICS will eventually collapse the US Dollar as the world’s Reserve Currency. Start researching that issue, and it becomes clear that will eventually happen. The Russians have a PLAN, and it does not include invading Germany, France, or Poland. The Russian’s military plan is currently intent on depleting and destroying the military assets of Belarus, keeping total control over the Black Sea, keeping the Bosporus Straits open, and keeping Turkey under control.