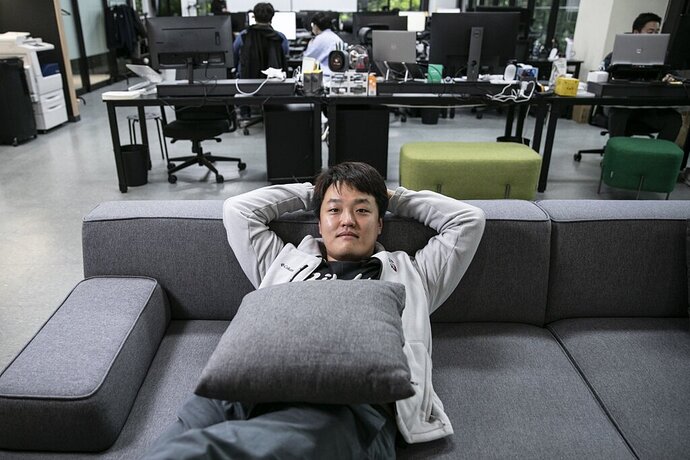 How a Trash-Talking Crypto Founder Caused a $40 Billion Crash

Do Kwon, a South Korean entrepreneur, hyped the Luna and TerraUSD cryptocurrencies. Their failures have devastated some traders, though not the investment firms that cashed out early.

How a Trash-Talking Crypto Founder Caused a $40 Billion Crash

By David Yaffe-Bellany and Erin Griffith

Do Kwon, a trash-talking entrepreneur from South Korea, called the cryptocurrency he created in 2018 “my greatest invention.” In countless tweets and interviews, he trumpeted the world-changing potential of the currency, Luna, rallying a band of investors and supporters he proudly referred to as “Lunatics.”

Mr. Kwon’s company, Terraform Labs, raised more than $200 million from investment firms such as Lightspeed Venture Partners and Galaxy Digital to fund crypto projects built with the currency, even as critics questioned its technological underpinnings. Luna’s total value ballooned to more than $40 billion, creating a frenzy of excitement that swept up day traders and start-up founders, as well as wealthy investors.

Mr. Kwon dismissed concerns with a taunt: “I don’t debate the poor.”

But last week, Luna and another currency that Mr. Kwon developed, TerraUSD, suffered a spectacular collapse. Their meltdowns had a domino effect on the rest of the cryptocurrency market, tanking the price of Bitcoin and accelerating the loss of $300 billion in value across the crypto economy. This week, the price of Luna remained close to zero, while TerraUSD continued to slide.

The downfall of Luna and TerraUSD offers a case study in crypto hype and who is left holding the bag when it all comes crashing down. Mr. Kwon’s rise was enabled by respected financiers who were willing to back highly speculative financial products. Some of those investors sold their Luna and TerraUSD coins early, reaping substantial profits, while retail traders now grapple with devastating losses.

Pantera Capital, a hedge fund that invested in Mr. Kwon’s efforts, made a profit of about 100 times its initial investment, after selling roughly 80 percent of its holdings of Luna over the last year, said Paul Veradittakit, an investor at the firm.

Pantera turned $1.7 million into around $170 million. The recent crash was “unfortunate,” Mr. Veradittakit said. “A lot of retail investors have lost money. I’m sure a lot of institutional investors have, too.”

Mr. Kwon did not respond to messages. Most of his other investors declined to comment.

Kathleen Breitman, a founder of the crypto platform Tezos, said the rise and fall of Luna and TerraUSD were driven by the irresponsible behavior of the institutions backing Mr. Kwon. “You’ve seen a bunch of people trying to trade in their reputations to make quick bucks,” she said. Now, she said, “they’re trying to console people who are seeing their life savings slip out from underneath them. There’s no defense for that.”

Mr. Kwon, a 30-year-old graduate of Stanford University, founded Terraform Labs in 2018 after stints as a software engineer at Microsoft and Apple. (He had a partner, Daniel Shin, who later left the company.) His company claimed it was creating a “modern financial system” in which users could conduct complicated transactions without relying on banks or other middlemen.

Mr. Shin and Mr. Kwon began marketing the Luna currency in 2018. In 2020, Terraform started offering TerraUSD, which is known as a stablecoin, a type of cryptocurrency designed to serve as a reliable means of exchange. Stablecoins are typically pegged to a stable asset like the U.S. dollar and are not supposed to fluctuate in value like other cryptocurrencies. Traders often use stablecoins to buy and sell other riskier assets.

But TerraUSD was risky even by the standards of experimental crypto technology. Unlike the popular stablecoin Tether, it was not backed by cash, treasuries or other traditional assets. Instead, it derived its supposed stability from algorithms that linked its value to Luna. Mr. Kwon used the two related coins as the basis for more elaborate borrowing and lending projects in the murky world of decentralized finance, or DeFi.

From the beginning, crypto experts were skeptical that an algorithm would keep Mr. Kwon’s twin cryptocurrencies stable. In 2018, a white paper outlining the stablecoin proposal reached the desk of Cyrus Younessi, an analyst for the crypto investment firm Scalar Capital. Mr. Younessi sent a note to his boss, explaining that the project could enter a “death spiral” in which a crash in Luna’s price would bring the stablecoin down with it.

“I was like, ‘This is crazy,’” he said in an interview. “This obviously doesn’t work.”

As Luna caught on, the naysayers grew louder. Charles Cascarilla, a founder of Paxos, a blockchain company that offers a competing stablecoin, cast doubt on Luna’s underlying technology in an interview last year. (Mr. Kwon responded by taunting him on Twitter: “Wtf is Paxos.”) Kevin Zhou, a hedge fund manager, repeatedly predicted that the two currencies would crash.

But venture investment came pouring in anyway to fund projects built on Luna’s underlying technology, like services for people to exchange cryptocurrencies or borrow and lend TerraUSD. Investors including Arrington Capital and Coinbase Ventures shoveled in more than $200 million between 2018 and 2021, according to PitchBook, which tracks funding.

In April, Luna’s price rose to a peak of $116 from less than $1 in early 2021, minting a generation of crypto millionaires. A community of retail traders formed around the coin, hailing Mr. Kwon as a cult hero. Mike Novogratz, chief executive of Galaxy Digital, which invested in Terraform Labs, announced his support by getting a Luna-themed tattoo.

I’m officially a Lunatic!!! Thanks @stablekwon And thank you my friends at Smith Street Tattoos. pic.twitter.com/2wfc00loDs

Mr. Kwon, who operates out of South Korea and Singapore, gloated on social media. In April, he announced that he had named his newborn daughter Luna, tweeting, “My dearest creation named after my greatest invention.”

“It’s the cult of personality — the bombastic, arrogant, Do Kwon attitude — that sucks people in,” said Brad Nickel, who hosts the cryptocurrency podcast “Mission: DeFi.”

Earlier this year, a nonprofit that Mr. Kwon also runs sold $1 billion of Luna to investors, using the proceeds to buy a stockpile of Bitcoin — a reserve designed to keep the price of TerraUSD stable if the markets ever dipped.

Around the same time, some of the venture capital firms that had backed Mr. Kwon started to have concerns. Hack VC, a venture firm focused on crypto, sold its Luna tokens in December, partly because “we felt the market was due for a broader pullback,” said Ed Roman, a managing director at the firm.

Martin Baumann, a founder of the Hong Kong-based venture firm CMCC Global, said his company sold its holdings in March, at about $100 per coin. “We had gotten increasing concerns,” he said in an email, “both from tech side as well as regulatory side.” (CMCC and Hack VC declined to comment on their profits.)

Even Mr. Kwon alluded to the possibility of a crypto collapse, publicly joking that some crypto ventures might ultimately go under. He said he found it “entertaining” to watch companies crumble.

Last week, falling crypto prices and challenging economic trends combined to create a panic in the markets. The price of Luna fell to nearly zero. As critics had predicted, the price of TerraUSD crashed in tandem, dropping from its $1 peg to as low as 11 cents this week. In a matter of days, the crypto ecosystem Mr. Kwon had built was essentially worthless.

“I am heartbroken about the pain my invention has brought on all of you,” he tweeted last week.

I am heartbroken about the pain my invention has brought on all of you.

Some of Mr. Kwon’s major investors have lost money. Changpeng Zhao, chief executive of the crypto exchange Binance, which invested in Terraform Labs, said his firm had bought $3 million of Luna, which grew to a peak value of $1.6 billion. But Binance never sold its tokens. Its Luna holdings are currently worth less than $3,000.

That loss is still only a drop in the bucket for a company as large as Binance, whose U.S. arm is valued at $4.5 billion.

“Most of the V.C.s have the analysts they need to assess these things,” Mr. Nickel said. “They may have figured they could cash out on the backs of retail.”

Much of the pain of the collapse has instead been felt by regular traders. On a Reddit forum for Luna evangelists, users shared lists of suicide hotlines, as people who had poured their savings into Luna or TerraUSD expressed despair.

The crash has also devastated the enthusiasts who were building start-ups that used the crypto infrastructure developed by Mr. Kwon.

Neel Somani, 24, quit his job as a quantitative researcher at Citadel, a hedge fund, in February to work on a project that connected Luna’s underlying blockchain to Ethereum, another crypto system.

In April, Mr. Somani joined Terra Hacker House, a monthlong program in a Chicago office sponsored by Terraform Labs and its investors, designed to incubate projects built on Mr. Kwon’s technology. Within a few weeks, Mr. Somani lined up $10 million in commitments for venture funding that valued his project, Terranova, at $65 million. He was close to hiring three employees, he said, and had 40 customers excited about the idea.

After Luna and TerraUSD tumbled, Mr. Somani and his fellow hackers initially thought Mr. Kwon and his partners could turn things around. But by last Tuesday, Mr. Somani realized it was over, and felt relieved he hadn’t yet accepted the funding. He lost around $20,000 of Luna, he said, which didn’t bother him since he has made money on other risky stock and crypto bets.

Over the last week, the desks at the hacker house have emptied. A Telegram group called Rebuilding Terra, with nearly 200 members, has been actively discussing how to salvage projects and funds.

Mr. Somani is sanguine. “For those of us who are crypto builders, the feast and famine mentality comes really naturally, and that’s maybe what attracted us to the community,” he said.

On Thursday, he plans to pitch his now-obsolete technology at the hacker house’s demo day. Most other groups have left the program, he said, so he expects less competition for a $50,000 first-place prize.

Erin Griffith reports on technology start-ups and venture capital from the San Francisco bureau. Before joining The Times she was a senior writer at Wired and Fortune. @eringriffith

A version of this article appears in print on May 19, 2022, Section B, Page 1 of the New York edition with the headline: Trash Talk Can’t Save Crypto Fund. Order Reprints | Today’s Paper | Subscribe

So apparentley this is the most catastrophic cryptocurrency crash in recent history. One theory I’ve heard is that this crash was caused by a planned attack from regulators, don’t know if that is true haven’t seen any evidence of that first hand. Regardless these are definitley outlier coins.

From what I’ve heard stable blockchain coins sound like a lot safer of an investment than bills printed by the u.s. treasury.