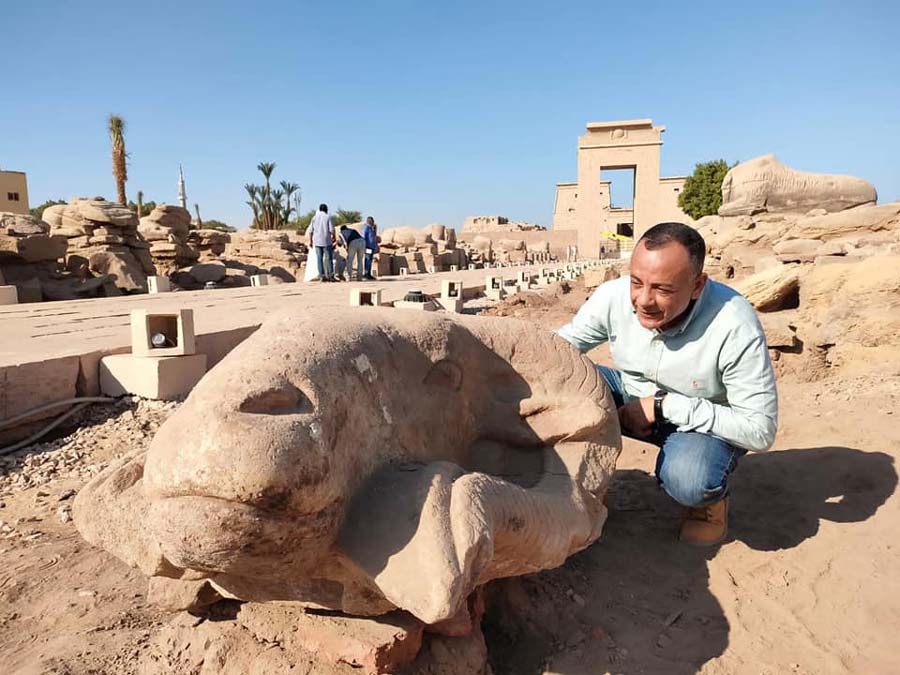 The remains of three giant ram head sphinx statues, known as criosphinxes, have been unearthed on Luxor’s Avenue of Sphinxes in southern Egypt. At least one of the sphinx statues had a coiled cobra carved on top of its head. The three gigantic statue ram heads were discovered south of Karnak Temple in Luxor, on the east bank of the Nile River. Modern Luxor surrounds the ancient Luxor Temple and Karnak Temple. In their heyday, a sacred processional avenue connected the two sacred royal sites that was lined with over 700 similar cult statues.

The Egyptian Ministry of Tourism and Antiquities announced on Oct. 11 that the three criosphinx statues are believed to be from the same time Karnak Temple was active. Mustafa Waziri, secretary-general of the Supreme Council of Antiquities, told the news site al-Monitor that the age of the statues is still being investigated, however, one of them has a hieroglyphic inscription dating to the reign of Amenhotep III, King Tutankhamun grandfather. This means at least one of the three statues dates to between 1390 BC and 1352 BC.

The hieroglyphic inscription dating to the reign of Amenhotep III, King Tutankhamun grandfather, was at the base of one of the criosphinx statues recently found in Luxor, Egypt. ( Dr Mostafa Waziry )

Egyptian authorities said the three giant ram heads were found by an archaeological team south of a gateway built by the Macedonian Greek royal Ptolemaic dynasty , who ruled between 305 to 30 BC. The “Avenue of the Sphinxes” can be described as a cultic processional walkway that connects Karnak Temple and Luxor Temple . Aligned north to south the avenue measures about 1.7 miles (2.7 kilometers) long. It’s earliest constructions date to the 18th dynasty (1550-1295 BC).

The 700 other sphinxes statues that lined the royal path mostly combine the body of a lion with the head of King Nectanebo I , who reigned between 380-363 BC. A Live Science article explains that the ram heads were part of three larger statues which at one time “rested on a body shaped a bit like a sphinx.”

Ram-headed sphinxes or criosphinxes, like the three just discovered, were also installed at the entrance to the temple of Amun , in Thebes. What then, did ram-headed lions (with cobras on top) mean to the rulers of ancient Thebes? 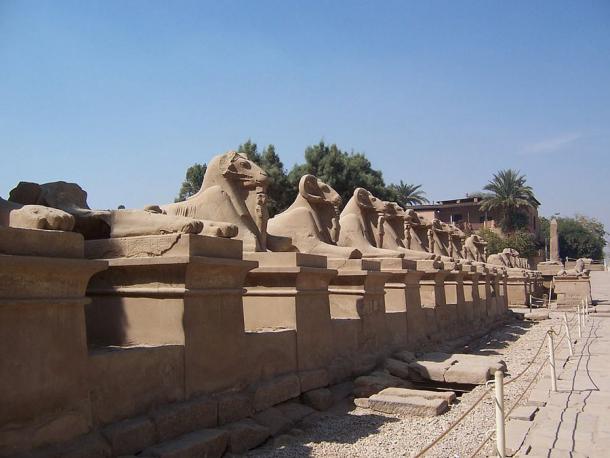 Avenue of the sphinxes or criosphinxes leading to the Karnak Temple Complex at Luxor, Egypt. (Daniel Csörföly / Public domain )

Greek historian Herodotus recorded the ram-headed sphinxes of Egypt as “criosphinxes.” He said they represented the power of a pharaoh, who was in turn protected by Amun, who was most often depicted with powerful curved ram horns. Essentially, the criosphinx was a symbol of power, and this is why rams-heads were chosen to line and symbolically protect the sacred processional walkway between the two main ancient temples of Thebes.

How then do we account for the carved cobra that rested atop one of the criosphinxes? The coiled cobra was another important symbol of royal power in ancient Egypt. In academic circles this symbol is formally known as the “ Uraeus snake .” When this coiled cobra was depicted on the forehead, or head, it represented the ancestral serpent goddess “ Wadjet,” who was believed to protect the Pharaoh’s divine sovereignty. 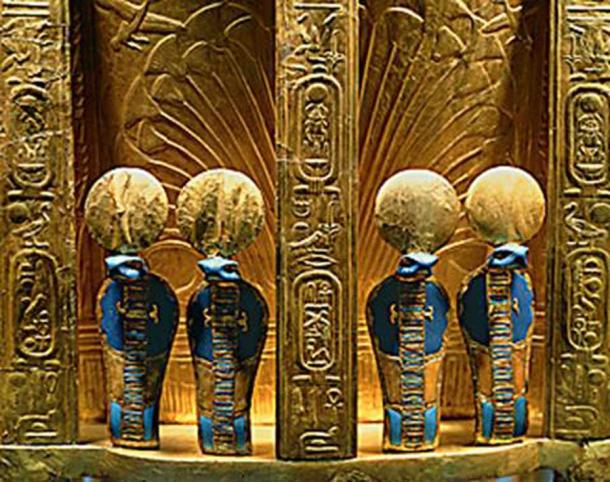 Uraeus snakes, which are cobras, are a famous Egyptian symbol used most often on the crowns of the ancient pharaohs. (GoShow / CC BY-SA 3.0 )

A golden Uraeus snake was actually worn in the crowns of ancient Egyptian rulers. In ceremonies and rituals, these snakes would have reflected the sun and all in attendance would have seen Wadjet’s spiritual protection shining from the pharaoh’s forehead. There was perhaps no better way to enhance, maintain and strengthen a divine claim over the land, and of course taxes.

Egyptologists are currently in the process of preserving the different parts of the three ram-headed criosphinx statues. Dr Waziri said in a statement that after the statues are plotted, reassembled, and catalogued, alongside the other 700 statues that line this sacred-avenue, they will eventually be exhibited to the public.

Top image: One of the huge ram heads that sat on top of what is called a criosphinx, a combination of a ram and a sphinx. Source: Dr Mostafa Waziry