It’s clear after reading this article that PUTIN is a WHO WHORE, just like our ‘Western’ so-called “health authorities”.

His RECENT pivot to WEF opposition agent is totally contrived for cult of personality brain dead.

Imagine a world leader attempting to appease CENTRAL BANK. It’s PUTIN, TRUMP, and BIDEN… and all the others you stupid wankers.

But the specifics of the coronavirus situation, the specifics of the pandemic, one way or another will lead to the fact—I’m talking about all the countries of the world here—that the unvaccinated will live less comfortably than the vaccinated. This is the reality we are facing,” the presidential spokesman said.

On October 26, Putin issued a list of instructions to regional governors—including a “recommendation” to order unvaccinated citizens over the age of 60 to self-isolate.

Putin IS A WHO-WEF WHORE. No mistakes.

In hindsight the most difference I see between the Western en Eastern societies is the infection rate of irrealities. That seems 100% for the Western side and less and more infused with ones own cultures on the Eastern side.

Maybe it is all an experiment to see if humanity or a derivative survives and under what circumstances? Maybe it is also to study race resilience.

It is as if every experiment ever thought of thru history is unleashed all at once simultaniously because now they can!

We all know, deep down in our souls, it’s THE MONEY.

I honestly think they will kill me for my FEARLESS opposition to their SLAVERY.

ALL evil bastards can GO TO HELL.

I AM A SOVEREIGN MAN.

Dear Peter
many times u jump quick to conclusions i believe. these are 1-2 years old, neatly edited articles, to look good unto the WEF-ers and show Putin as complicit.
the Russian Secretary of Defense just announced last week, that the Covid-19 is a bioweapon made by the USA. everybody is silent in the West on that. not a single article. that is a ‘conspiracy theory’ that the WHO just started to ban…
this Slavsquat who lives and writes in Russia - according to him -, did not mention this curiously at all.
waging a hybrid war with the West is not an easy task. the Sputnik is not mRNA stuff. they did not use Pfizer…
Putin himself was not injected. as the Russian Forces were only partially.
this Slavsquat guy (Riley Waggaman) is somebody who is trying hard to pull the wet-sheet unto Putin in the last 1-2 years. i know, since i am subscriber of his substack in the last year. at first he wrote some good things, now too, but if u scrap his surface a guy emerges who ate some bad apples on the way. take a look on his face. i do not trust him, but he is freely able to criticize VVP in Russia! that should tell volumes.
moreover Putin always tried to keep up the international framework of law and institutes forget not, so later, they can be used.
so i am more careful on judging VVP dancing with the poisonous octopus.

p.s.: oh, i just see, he had taken down his own face and posing as a Snowden-babushka avatar on substack. hehe. oh my, what a nuuudle. he used to work for RT, then RT let him go 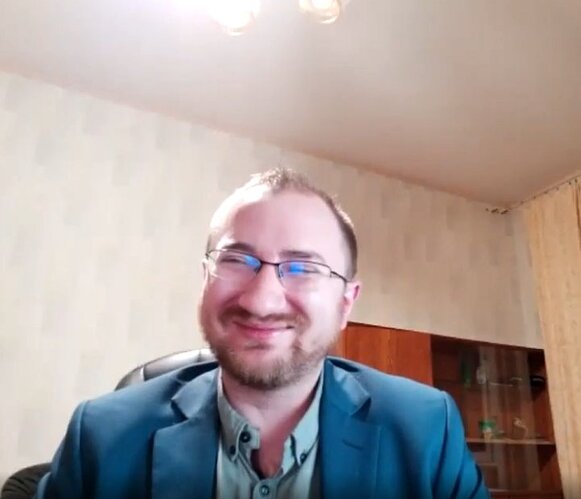 look at his credentials…

I’ll reply, only because I’ve had too much coffee this morning. Normally, I would let bygones be bygones.

I agree with you. PUTIN totally caved to WHO-WEF injection system, and treated his people with “Soviet style” syrup that is specially formulated with added subtracted genetics.

And now he was told to swim to the other side of the creek and begin hollering from that side. For the sake of the dialectic.

He caved, like a bear in the Siberian woods. Take it or leave it. I believe what you say about the source, but that hardly matters now.

Peter, the language “you stupid wankers” is NOT acceptable on this website. Clean it up, or leave.

“Then said I, Wisdom is better than strength: nevertheless the poor man’s wisdom is despised, and his words are not heard.”

We’re all already in hell, Peter!

so u feel urself a poor man here, who has wisdom?
just asking.

everybody speaks for him/herself. i am not in hell, although having problems.

Good to hear you’re not in hell, congratulations on that.

I think the issue of Putin’s allegiance to WEF and the like is interesting. My instincts are that he is walking the line between realpolitik and strategic restraint. As for the potential future of digital money and ID tracking, I estimate he (or a successor) will promote the adoption of these technologies (overtime) in way that maximizes Russian sovereignty. As for the jab, many people were fooled. As a canary in the coal mine kind of person, Medical tyranny scares me the most.

it’s nothing special. just do not stick with it, or if u r in it, get out. just that simple. only the Western Christians make that much of a fuss of hell. or other people make life hell for u, but thats not the same. don’t let them.
in the real hell, there r 2 types: prisoners and guards. sometimes they change place, and they r always angry at each other and everybody else. and suffering is constant. this is Earth realm, u may fleetingly experience the hellish suffering, but there is still good.
speakin’ about hell here is like when people say ‘i am having a break-down’. those r mostly already over that…

Quoting Scripture in a self-righteous manner isn’t helping your case.

I read the two referenced articles a couple of days ago. I wasn’t terribly surprised at the events recorded. I do remember that, at the time of these events, that is, pretty much since the declaration from the WHO of “We declare a pandemic, we think”, the Russian Federation, spearheaded by Mr Putin, was ever so terribly keen to ally with the “western partners” and conform to the remedial practices (which had yet to be defined) that would allow for a recovery from the pandemic and a path back to social and economic norms, as they used to be.

Recall that the Russian Federation (RF) was keen to set up and/or assist in the running forums and working groups and participate, if not lead the way in agreeing the way out of this UN declared measure. Regardless of the background to the reasons why the pandemic was declared, my observation at the time was that the RF was in the business of trying to show the west that they had the will, expertise and means to apply themselves to this technical problem and were willing to expend treasure to dig Europe, their partners and other various countries out of this medical emergency. Recall that they were one of the first to produce a “traditional” vaccine and were willing to offer it to anyone who was in “need”. Recall that they were rebuffed by most western countries who were ever so eager to sign up to the big brand names that emerged and the fantastic new technological solutions, never mind the fine print, that came along with them . The UK was particularly interested in thwarting the RF from gaining any international recognition by way of their speedy technical solutions, and if you recall, it was after the genius of some rando in the UK who “led the way” in designing “the safe and effective” Astra-Zeneca injections that the RF was pretty much deleted from having participated in the whole “we’re in this together” affair.

I suspect that the way the RF was treated by the west, regardless of their efforts to solve the problem of the pandemic, should be gathered in the totality of the RF’s analysis of the west as completely anti-human, crazy and likely to get everyone, including themselves, killed. My impression was the the RF was trying to get “in front” of the pandemic by providing a quick and, under “normal” circumstances, effective solution to an emergent, what was for those who were aware, political problem that would have allowed the RF to show that there was even a way to stymie the bad actors in the west who were willing to use the medical route to sow their seeds of destruction. I don’t doubt they were mightily annoyed that their solution was tabled for discussion sometime after most people had already left the room for free drinkies and a good old knees up at the Modern Pfizzer Bar.

I suppose that, a couple light years ago in the roaring early months of 2020, being able to some up with a “traditional” vaccine, with responsible provenance and medical practice, should have been a cause for some celebration. Remember that, even though it was only two years ago, a whole lifetime of attitude adjustment and priority reorganisation has taken place for people who have watched this whole medical tyranny unfold before our eyes, and it’s difficult to remember the halcyon days before Sleepy Joe and Co took to the Oval office and ran such a wonderful show. I am not a Putin fan-boy (for those to whom this must be said, please make the effort to allow more than a simple dialectic in your head, it will make you saner) but, in my opinion, the RF attempted to be a “good westerner” by playing by the rules, spend time and money on a solution, was told to bugger off (sorry, Dr Farrell) by their western partners, and they lumped another shovel full of disgust into their bucket called “Reasons to kiss the west goodbye, do not overfill”.

I agree and I do recall those RF overtures. I hope consumers of mRNA realize it is a result of: the need to maximize profits by outsourcing the vaccine ( or other) protein production to the individual, and an attempt to to commercialize (and obtain ROI from) the years of research into genes and proteins - now a solution looking for a problem. The technology may be beneficial one day but there is not sufficient testing or long term studies. Yea