Un headquarters: statue of lion with wings as described in daniel’s dream erected

UN HEADQUARTERS: STATUE OF LION WITH WINGS AS DESCRIBED IN DANIEL’S DREAM ERECTED

The first was like a lion but had eagles’ wings. Daniel 7:4 (The Israel BibleTM) 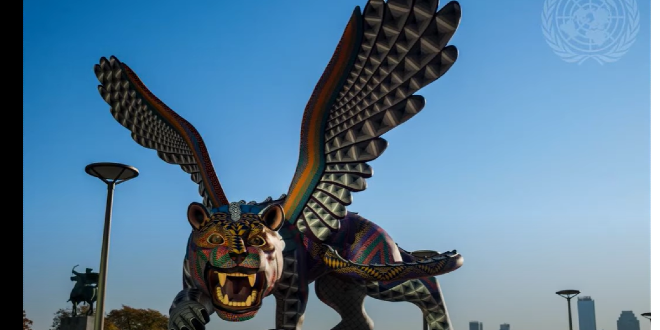 A statue with Biblical implications has been erected recently outside the United Nations headquarters in New York City. The statue, entitled the ‘guardian for international peace and security, is situated on the Visitor’s Plaza outside UN Headquarters. According to the UN, the ‘guardian’ is a “fusion of jaguar and eagle.” It was donated by the Government of Oaxaca, Mexico.

Many have noticed an eerie similarity to Daniel’s dream in the Bible:

The first was like a lion but had eagles’ wings. (Daniel 7:4)

His dream featured four beasts – a lion with wings, a bear with fangs, a four-winged leapord. The fourth beast had ten horns.

The first was like a lion but had eagles’ wings. As I looked on, its wings were plucked off, and it was lifted off the ground and set on its feet like a man and given the mind of a man. Then I saw a second, different beast, which was like a bear but raised on one side, and with three fangs in its mouth among its teeth; it was told, ‘Arise, eat much meat!’ After that, as I looked on, there was another one, like a leopard, and it had on its back four wings like those of a bird; the beast had four heads, and dominion was given to it. After that, as I looked on in the night vision, there was a fourth beast—fearsome, dreadful, and very powerful, with great iron teeth—that devoured and crushed, and stamped the remains with its feet. It was different from all the other beasts which had gone before it; and it had ten horns. (Daniel 7:4-7)

The beast represent all of the kingdoms that subjugated the nation of Israel. The lion with wings represents Babylon. The bear represented Persia. The four-winged leapord represented Greece and the final most treacherous of them all represented Rome.

The verse is a reference to the final redemption whereby the Messiah arises from the demise of the enemies of Israel, represented by the beasts, to reign supreme:

As I looked on, in the night vision, One like a human being Came with the clouds of heaven; He reached the Ancient of Days And was presented to Him. Dominion, glory, and kingship were given to him; All peoples and nations of every language must serve him. His dominion is an everlasting dominion that shall not pass away, And his kingship, one that shall not be destroyed. (Daniel 7:13-14)

Having a statue representing Biblical Persia in the UN headquarters can be an ominous sign as the world powers have recently re-engaged with Iran, modern-day Persia, to negotiate a potential solution to their apocalyptic nuclear ambitions.

The sculpture was crafted by artists Jacobo and Maria Angeles.