We all know where that led to last time, don’t we.

Scott Ritter, an excellent voice on all things Russian has been making the rounds. I heard him say, recently, “expect a far right backlash in Europe.” We’ve already seen the election of Victor Orban.

So, that brings me to the subject line: “When the German Far Right Hits the German Hyperinflationary Fan.”

Back in 1993, South African Zulu Sanosi and Shaman Credo Mutwa made the following prophecy: That a powerful German leader will rule with an iron fist and will achieve with cunning what Hitler tried to achieve with brute force. This second Hitler, they will hail as the savior of Europe and the “New Bismarck.”"

Save Europe from what? Economic problems. It is inferred in Credo’s cryptic statement. I like to file psychic predictions made by people from dreams and visions from Nostradamus to Credo Mutwa into the back of my brain. As files to be retrieved and looked at and revisited again.

I think its time to look again at Credo and his visions. And pay special attention.

New Bismark, Second Hitler. Cunning instead of brute force (which most leaders today use: cunning. Read: information warfare, economic warfare, 2nd generation warfare, cyber warfare. Instead of Panzer tanks and Howitzer guns. Because that’s how war is fought mainly these days, between great powers. And by proxy in satellite countries / border countries.

So look out for the German Far Right Hitting the German Hyperinflationary Fan. Just saying…

I think the countries that has preserved their culture will have the most freedom thinking people. I am not sure that is Germany nor France for that matter.

Technological mind control is probably more like it. I don’t understand what you mean by “I think the countries that has preserved their culture will have the most freedom thinking people. I am not sure that is Germany or France.”

Fascism occurs in a place where there is NOT freedom thinking people. It comes from a victim mindset combined with a desperation to preserve culture from a perceived scapegoat. I am not saying this will be a GOOD thing and I hope I didn’t imply that. Credo Mutwa spoke of this “second Hitler being hailed as a New Bismark” in a tone as if he was some kind of Antichrist, arising. Much like Nostradamus’ feared “Third Antichrist.” A Bad Guy. Who rules with an iron fist over Europe. A false messiah-like figure that people “hail as a savior”. Whom they THINK is a savior at first, but is really not. But a ruthless, cunning, ruler. You push people to enough desperation in Europe due inflation and there WILL be a backlash, and they WILL fall for a far right figure, somebody they perceive to be a man on a white horse coming to save them.

@Honeyradiance
Drones have no culture they are programmed, mind controlled. Humans have culture so I see a direct relation between culture and freedom. Western countries are for decades under attack in undermining culture and substituting it with anti-humanism.

The Germans (Nazis) are the 7th “empire” in a list of empires who have attempted to destroy The Jews. The others are: Egypt, Assyria, Babylon, Medo-Persia, Greece, Rome; Germany (Nazi) makes seven. Can’t help but notice the relationship of the 7th & 8th. I always wondered what this scripture meant. I’m sure there are other explanations but food for thought.

I agree that economic chaos normally leads to dictatorships, and I think massive economic problems and a brutal fall in the standard of living in Western Europe (and other Western countries) is likely in the next couple of years.

Personally, I’m more worried about central banks, with their new central bank digital currencies, coming in as the savior than I am about political parties. But things are getting so unstable, it’s hard to predict which way things will go – except to say that we’re in a time when major societal, political, and economic changes are likely.

Me too @FiatLux . I think currencies is really what this is all about, along with inflation tax.

Well, it says that the beast is the eighth but is of the seven. Meaning that it is made up of elements of all seven previous. Probably a mish mash of all those other nations. Could be German leaders working with Middle Eastern leaders, perhaps? And also in conjunction with the Vatican and Rome? We already sort of saw a preview of this in World War II when Hitler worked with Hajj Amin Al-Husseni the “grand Mufti of Jerusalem” who befriended Himmler and traveled to Germany and got his own Waffen SS unit and who helped with the “Final Solution.” At that same time we saw that the Pope Pius X was sympathetic to fascists too, along with Italy being Fascist and part of the Axis. 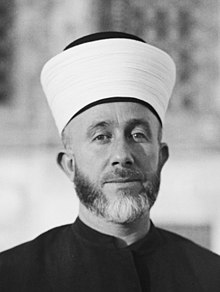 Mohammed Amin al-Husseini (Arabic: محمد أمين الحسيني c. 1897 – 4 July 1974) was a Palestinian Arab nationalist and Muslim leader in Mandatory Palestine. Al-Husseini was the scion of the al-Husayni family of Jerusalemite Arab notables, who trace their origins to the eponymous grandson of Muhammad. After receiving an education in Islamic, Ottoman, and Catholic schools, he went on to serve in the Ottoman army in World War I. At war's end he stationed himself in Damascus as a supporter of the Ara...

No, it doesn’t say that. It says the 7th is yet to come (& it was Roman times when written). There’s no mish mash to it. Please read it again, carefully.