New podcast about the top of the deepstate!

More information about the swedes who has controlled the world for about a century.

They have used the Rothchilds/khazars as their bagman in case noodles goes down.
However the Alliance is going through their facade and shooting right att the head of the hydra. 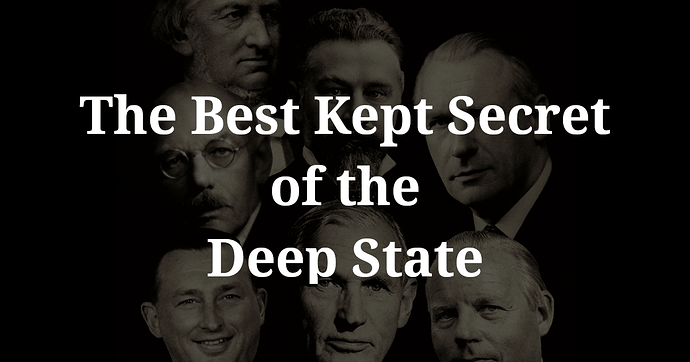 The Best Kept Secret of the Deep State - Podcast

This podcast will give you the foundation for a greater understanding about the entity commonly referred to as the "Deep State". You will learn about a very powerful family whose motto reads in Latin "Esse, non videri", which translates to "To act,...

Thanks Soup. I will listen to this in a bit. Have been curious about Swedish involvement since you started posting about them.

I appreciate the interest…
Been trying to get people to listen about these connections for over 5years.

Its finally getting traction outside of the small circle in my surroundings who gives a damn.

My first introduction to possible modern, Swedish involvement is rather cheesy. The Girl With The Dragon Tattoo (Swedish version). I have the trilogy; much higher octane than English version, IMO. It made me wonder but wasn’t lots of info. Campy, I know, but piqued my curiosity.

I shared this in My first thread…
Its a solid video, however i dont really share owens overall attitude about the jewish community.

He seems to really have a beef with them overall, but i havent had his experience so im not going to judge his opinion although i think its counter productive for the movement. 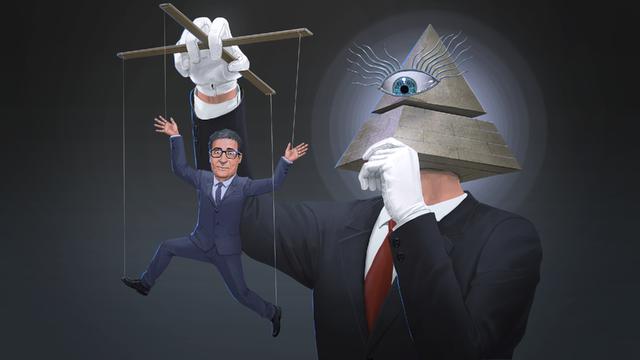 OWEN BENJAMIN || WHO'S ABOVE THE JEWS?

Owen alleges here that may be the Wallenberg family of Sweden. Never heard of them? You may never forget their name after this one! Important video repost about the low-key but massive business group, and hidden hands behind certain sicko blackmaila…

@Soupcommie
Wish you had something on the order of the video above but narrated by someone more well-spoken & objective; don’t quite know the term I’m looking for. I really don’t want to share this particular one.

Yeah i know owen is not really someone who really makes his point without stepping on alot of toes.
Just like the germans was blamed on the rise of nazism the jews are being sacrificed to to take the fall of the zionists.

He puts way to much of his own feelings and opinions in his rants.
He obviously has alot of hate for the jewish community.

Atm most of this information is only avaiable in Swedish lectures and some very long articlces.

If you have the patience i would read this over a few weeks or days. 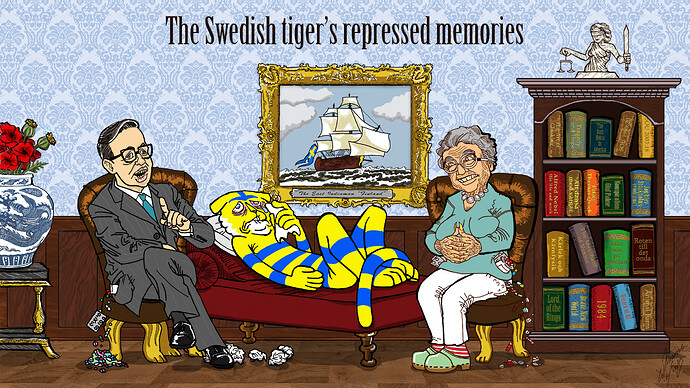 Prologue Our idea with this article is that once and for all, report not only what interests lay behind the two World Wars and the outbreak of the Cold War, but also the root cause, based on an operational strategic planning horizon extending...

Thanks Soup. I’ll have to watch this the same way one would eat a whale, in small, bite-sized pieces.

I still think that GWTDT could have been a minor, fictionalized representation of this family.

Highly interesting how Sweden did not close it’s doors during covid. Guess they knew what we did not.

I also forwarded your article to Dark Journalist.

Thanks man, he was one of the guys ive been trying to reach with this.
I sent e-mails to over 10 so called conspiracy podcasts last year.

Only pat miletech of conspiracy farm took it seriously and actually responded…
Although ive heard the term Stockholm syndrome being used alot the last year in some of these podcasts.
So maybe they saw what i shared but fear could have made them hesitant.

My theory is that dj and the doc actually knows about these connections.
(with all their thorough research i find it impossible they are Clueless)
They have come very close many times but stop just before they reach the Wallenbergs.
But they probably dont want to be the first big show dropping this bag of worms.

However in the grand scheme of disclosure it hasnt been the right time to go after the head untill recently.

The public first needs to learn about the fall guys(Rothchilds/bankers,Vatican,nazis,commies,etc)
Once people understand that these orgs then we can start talking about the telecom infrastructure that connects all these district managers etc.

That is the only way to digest it, esp if someone is new to the concept of a global deepstate.

However i suspect you will recognise alot of the names in the article.
Most of it is stuff you can read in other places.
The author of the article has just put together alot of dots that others missed.

Its all based on open source material and historical documents.

Actually their research quality is only matched by dark journalist in my opinion.
The difference is that dj has his focus and they have theirs.
But there is a huge overlap in their material, the same names pop up alot!

That tells me that both of these teams of researchers are very close to the truth.

I’m sure this & other old families hold the key to what’s actually going on but, I don’t believe it has to be one above the other, nor, one family ultimately in charge. This family, which I’m just going to call “W” for brevities sake, is no doubt in the vicinity of power of Britain’s royals (which article says they are part of) and very quiet about it; likely having a great deal to do with Sweden remaining open-for-business during covid. Their silence & lack of public notoriety makes them all the more dangerous & should be watched closely.

Yes, DJ & Dr. F. have their bent & W just isn’t flashy; still, they might find their way into the mix somehow.

I have to depend upon you to tackle W, as I have my angles to cover & appreciate your original ideas on this. Please try to keep articles short & avoid phone pictures as they’re difficult to read.

Thanks for your work, Soup.

that was good, thanks!

Imo though the elite cooperate only to serve their self interest.
There is no true loyality in those circles, they just come together because they have a shared interest in sucking us dry.
Thats why i think their structure crumbles very fast once cracks are visible.

I beleive that most of the so called deep state has no idea what they are involved in.
Its mostly useful idiots who are just cogs in the wheel.
Once their money machine cant print fake money its over.
They are dependent on hiring mercs to do their fighting.
After what is going down in Ukraine idk how many new recruits they have.
Esp if they cant pay them in dollars which seems to be dead in the water by next fall.

The reason i beleive “W” is in charge is because they control all the critical industries.
With telecom they have the blackmail on everyone who ever used a phone etc.
Basicly everyone needs their technologies to be able to live nowadays.

I am def open to the idea of more layers above them though.
But untill we have more solid information about who has controll over the ssp etc. Then “W” seems to be where we end up ATM.

I beleive that most of the so called deep state has no idea what they are involved in.

I think you need to define your terms better. Who is Deep State, Elite, etc.?

Disagree that W is at the top rather by themselves but, you have your opinion. They might be in, or, close to top tier but by no means are they alone.

We probably agree more then we think, semantics aside i think alot is lost in translation etc.

My view about the structure is that its built around blackmail and hiding ownership.
Basicly to have the most power you want to look clean on record and not have to much open power.

So there is going to be a few layers between the people making decisions and the people performing the action.

So older powerstructures like the vatican who once was the top dog (maybe they never were?)
are being put into the spotlight while the newer more powerful structures are hiding their part.

For example alot of the truthers have heard the history of the Rothchilds who bought up england by having a information advantage (something about having the best carrier pigeons?)
Back then that was the cutting edge of intelligence/spying.

But after the spread of telephones carrier pigeons became quite a primitive method of sending information.
But the Rothchilds still had the aura of the Kings of zionists and was marketed as the hidden rulers of the world.

Now im not saying they are some rinkadink operation.
They were still allowed to keep their empire and do their dirty deals.

However every time they used a telephone someone was listening(with or without their knowledge)
So at some point someone showed up with a dossier and a deal they cant resist.

In general they are/were probably on board with whatever the people listening to them wanted.
However at some point they probably understood that they arent the ones in charge.

This principle just got more rigid as the world got more connected through internet and the expansion of digital systems.

What i mean with someone having more Influence then others is that everyone under blackmail can be sacrificed to protect whoever controls that information flow.
Someone knows what everyone else is doing and everyone else is dependent on their intel to be able to make the right decision.

That way the Rothchilds are on one side and other puppets are playing the game on the other side.
But the left hand doesnt know what the right is doing etc.
The head knows everything since only the head has ears and eyes.

With all that said i agree that we have no idea about what is lurking above what we can see.
Aliens,demons or just very sneaky humans could def hide somewhere were we cant see.

Maybe an unknown part gave W the access to the technologies that they need to keep their empire.
(Maybe there is something about the deals that nazis did with greys?)

Or maybe W is the Grey’s?

Btw, episode 2 is up on the podcast now.

I vote for “just very sneaky humans”, as humanity has the ability for tremendous evil on our own; no need for assistance from other “beings” in this area.

Yes, I do think we mostly agree & are separated by language terms.

do you have a link please?