THE ONGOING ECONOMIC WAR AGAINST GERMANY AND THE NORDSTREAM ATTACKS

Originally published at: THE ONGOING ECONOMIC WAR AGAINST GERMANY AND THE NORDSTREAM ATTACKS

Most regular readers of this website are familiar with my hypothesis that there’s been a quiet sort of economic war between the Anglo-Sphere globaloneyists, and Germany. I came to this conclusion shortly after 9/11 when it was revealed that Deutschebank, among others was heavily involved in heavy put trading prior to the 9/11 attack, and…

Seems to coincide a lot with what Alex Krainer is reporting. 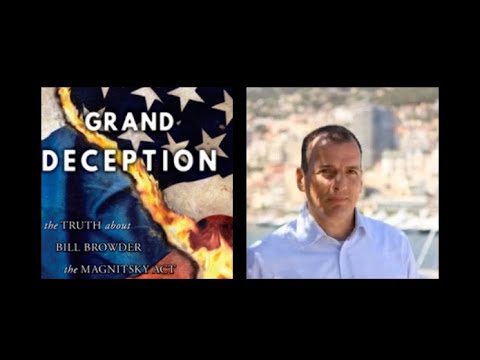 and it was not just a hole, long stretches of the pipeline are no longer present.

Sweden is so worried other allies will say who did it that Germany and Denmark have been blocked from helping in the investigation. that means one of two things. 1. The United States. 2. Israel. they certainly would not be shutting other countries out if Haiti did it. Sweden was going to have Germany and Denmark join the investigation until an easy and inconvenient answer was found, which caused them to declare a “security classification too high to share” with allies. .

Der Spiegel had this:

"Contrary to plans, Sweden, Denmark and Germany will not form a joint investigation team to investigate the leaks from the Nord Stream pipelines. According to SPIEGEL information, Sweden rejected the establishment of an international “Joint Investigation Team” (JIT). According to information from security circles, Sweden is said to have justified its refusal on the grounds that the security classification of its investigation results was too high to share them with other states.

Translation: an ally of Sweden did it and Sweden is shutting up until the tail can be put on the “right” donkey, IF it can be put on one at all. and it is SO BAD that other allies can’t even know.

This has gotten so bad that Sweden seized the evidence they found on the seabed and shut up:

"Shortly after the sabotage at the end of September, the German government decided that German investigators should participate in the investigation. Last week, the federal police and the Bundeswehr sent two military boats to one of the damage sites. A “Sea Cat” underwater drone was launched there. Sweden had previously inspected the scene southeast of the Baltic island and also seized evidence on the seabed.

The German investigators should now first evaluate the images of the “Sea Cat” underwater drone. A larger crater, indicating a massive explosion, is said to be visible on it. In addition, the pipeline is said to be completely disrupted over a longer length, possibly because the current washed away parts of the pipe after the sabotage action.

So far there are only speculations about those behind the sabotage action. The only thing that is clear is that on September 26 there were several massive explosions under water near the course of the two Nord Stream pipelines. The detonations were so violent that several institutes that normally monitor earthquakes registered significant seismic swings. According to an initial analysis, the German authorities believe that an explosive force comparable to 500 kilograms of TNT was required."

This is a hot potato, so I captured the report to prevent it from vanishing. 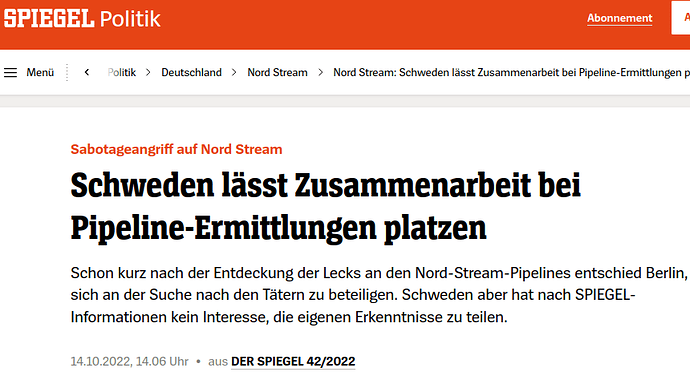 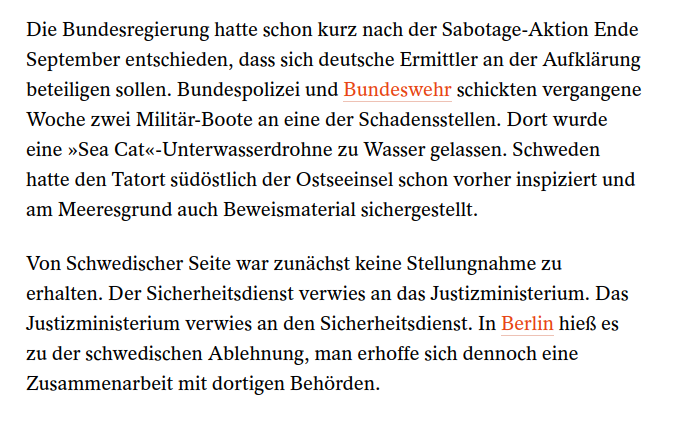 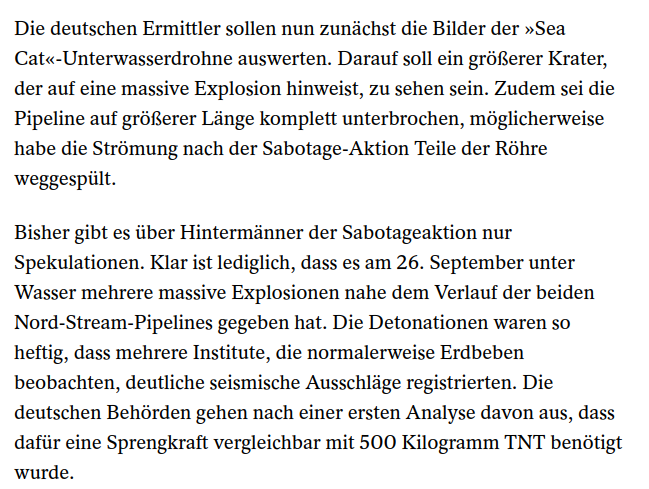 I would like to add that the idea that NATO now existing, at least in part, to control Germany is sinking in and might answer what to me has been a nagging question.

Germany, the rebellious child must be kept under control. She’s just too hard working and creative, makes the rest of the children jealous and look bad.

Not to mention the opposition to the Iraq war.

They’re going to squeeze The Germans just as they did with Versailles & eventually get a bad reaction.

These actions being aimed at Germany truly would explain many things; missing pieces of the puzzle. Everything just keeps coming back to them.

IF I were a Dispensationalist, which I am not, I would wonder about this section of scripture (link) and whether it applied to The Germans, remembering it’s being written from a Jewish perspective.

Well that certainly fills in a lot of pieces. Goes to show how devious and crafty these folks are that we think are nuts. Thanks for posting.

And Poland is the sullen silent kid at the back of the room who, cloaked iin a Union Jack, one day brings a gun to school and goes on a shooting rampage, 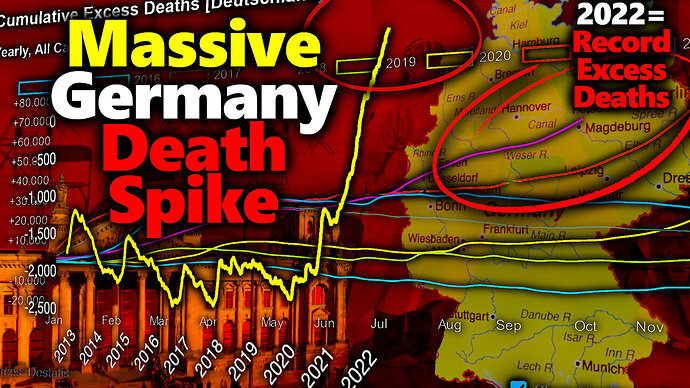 Germany Sees HUGE Spike In Excess Deaths After Vaccine Rollout, No End In...

USMortality can be found here: https://de.usmortality.com/ & https://twitter.com/USMortality/ Want more videos? Join the leading researchers on https://GroupDiscover.com to find the best videos from a

Boo!, hoo,!, poor Germany, their plan of controling all energy market in EU thru NSI and NSII didn’t work out. No sympathy from me Mr. KRAINER.
Let’s not forget that there is a silent player in the geopolitical arena called Nazi International with their secred black projects all over the world. Question? Do they still get financing from the gold they stole during the WWII in Europe? That money is probably gone long time ago. Then who finances them now? Yes you guessed it. Their dear original fatherland otherwise known as IVth Reich or as I like to say it, Unholy Roman Empire of German Nation.

Poland got hit by both the Nazis AND the Communists, kinda makes for a bad experience and the will to strike back.

The German plan and the globalists plan seem from the same template, but one is strong enough to knock out the other as competition.
By the early 1950’s Germany’s industrial base was up and running by the same families running it during the war. Nuremberg trials were pretty much show trials with a few sacrifices. Most got off with fines, a light prison sentence or an all expense paid trip to the United States and the Soviet Union of Russia.
Don’t forget the CIA absorbed their intelligence unit. The USSR probably got a few for theirs.

WWII is still on. Only Wehrmacht capitulated in 1945.

No one capitulated, it was a “theatre of war”. The movie has had many sequels, too many to count.

Gangs competing for bigger slice of the pie; it gets worse as the time of closing the door nears. In war, the hardest fighting is always just before the end.

What I’m not quite figuring is why Israel was so gung ho to be the first in the jab revolution, unless the jab offers something other a than death for some survivors? Perhaps something, or someones, superhuman? I’ve had that suspicion for a long time.

It all just so nuts. I have to wonder if everything we see & hear is completely AI now?

How about the jab as a loyalty test? Survivors have proven they have what it takes to obey and survive in harsh environments and not complain or cause trouble.

Poland will do what it will. Aligning itself with Britain against Russia seems, well, kind of a polack move geopolitically. On another note, their tradition of staunch Catholicism would seem to align more naturally with Russian Orthodox Christianity than with British secular humanist atheism.