Will Trump get blamed for the vaccine failure?

I respectfully disagree and have given the reason numerous times.
USMCA is PROOF that Trump is NOT America First.
https://ustr.gov/trade-agreements/free-trade-agreements/united-states-mexico-canada-agreement/agreement-between

All the polls for the next election have Trump in a ‘commanding’ lead. If he chooses DeSantis as his VP then ‘all-hell-will-breakforth’ from the DemonCrats.

So-what? Biden is much worse than ‘anything’ Trump did.

Think! Trump started building ‘The Wall’ on the southern border states in order to stem the flow of illegals. That was a nightmare for the Demoncrats, and even most of the upper echelons in the Repulithug Party were very unhappy about it.

This is an interesting article 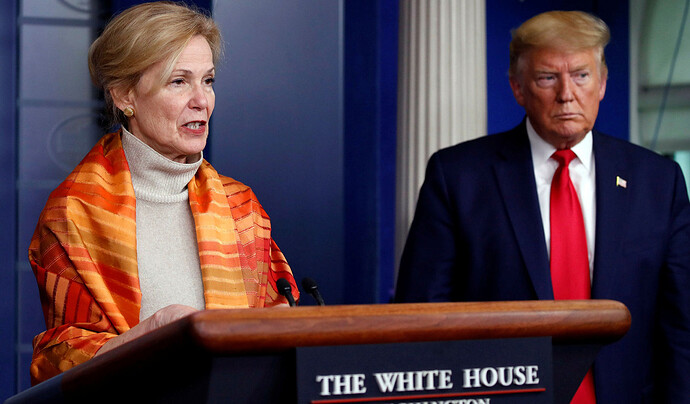 It Was Birx. All Birx. ⋆ Brownstone Institute

Considering all this, the questions arise: Who was actually in charge of Deborah Birx and whom was she working with?

The blame game for the covey debacle will provide much diversion as the more nefarious climate scam is used to destroy the current civilizations to bring in the technocracy and population reduction as planned.
Full speed ahead and damn the consequences.

“It’s so bizzare that now Trump and the Pentagon will be responsible for everything.”

DJT is a Person of Interest, or perhaps it could be better said, he is a, “fill-in-the-blank-here’, or perhaps DJT is the 'Lightning-Rod”, which ‘collects, or perhaps diverts, and/or perhaps divides’ the OPPOSITION.

AS WRITTEN ABOVE, more could be said here…and will-be said… once a Person’s MIND is open to the acceptance of what occurred prior to his election as POTUS.

Of course on this ‘thread’ no Person really wants to ‘know-what-happened’, because your minds are already ‘made-up’, and have been recorded.

IOTHWords they have been transcribed… as where all those ‘glorious-words-carved-in-stone’ about all those Egyptian Pharoahs, but who in the World wants know anything about the 'Great Pyramid?

Why in the world can you not provide us ‘poor folks’ with some sort of analysis of ‘YOUR THOUGHTS’? Are you some sort-of-bot-that-only-posts-stuff-you-are-unable-to-analize’? Do you even have a brain?

What ‘sin’ did DJT commit?

he will really need a grindstone to wash down the vaxx, which he backs to the day.

So-what? Biden is much worse than ‘anything’ Trump did.

You still don’t get it. USMCA opened the legislation for Biden to do what he is doing.
Did you see the border “wall”? A POS, at best, a nice hand out to BS business.
I could go on, but just to say, I read The Agreement. It’s why Canada is doing what it is & why Mexico & other countries are allowing people to stream into Our Country.
It’s all there in black & white. READ IT! And yes, there’s the vax that he pushes, still.
This IS a show & Trump is a key actor in it.

Why would I post an analysis, I’m not an analyst. I’m just a poor peasant like you

Today, the FDA approved “Bivalent Ba.5 Booster” because of an unspecified “emergency”.
The booster was tested on, drumroll, 8 mice. That’s it.
It will be given to millions of people next week.

If Trump is so ‘bad’, why was it neccessary to steal the election in order to get rid of Trump? Or, why have the FBI raid Trump’s personal residence? Trump is the ‘most dangerous man’ to the Demoncrats.

First, they’re ALL bad! Not just Trump. 2nd, how do you know Trump was not informed beforehand that the election would be “stolen”? Did you not notice the change in him when he returned from Walter Reed (so obvious)? Did it ever occur to anyone that he was informed he would lose, no matter the vote count & to go along with the planned program? He doesn’t like it, but doing it anyway & no doubt trying for a bigger piece of the pie than he was promised. It’s a SHOW! It’s a perfect, divisive ploy.

This is a gang fight! They’re all headed for the same goal (assets & control), but different factions. IMO, what’s happening with Trump is a brilliant DIVERSION to take Conservative American eyes off the doors that are closing behind us. It’s very smart and ultimately, pretty simple.

Trump was the set-up.
Biden is the take-down, as much as he can.
Trump or other cycle back around and finish the job!

This has been practiced throughout the ages.

Political ideology is only one of many tools useful to social engineers hired by TPTB to implement their theoretical idea of a technocratic “civilization”. It doesn’t matter if it’s a foolhardy idea, it’s one they want implemented whether we like it or not, and they have the means to do the experiment.

So following your analysis, which is ‘one’ way to see things, this is a ‘gang fight’ between gangs, which makes a good analogy. Would you also agree there are even more gangs, or factions vying for control?

NEXT - I’m not fully ‘buying’ your analysis that Conservative American eyes are “off the doors that are closing behind us”. Liberal American support for the present POTUS is also in a downward spiral, because the present policies are hurting everyone.

Next, since you are reading and studying the USMCA why not post some tidbits on some of the worst parts?

USMCA is not mere political ideology, but a broad-based plan to implement North American Zone. It covers land, water, employment, corporations, immigration for cheap labor, etc, and all the rest.

Next, since you are reading and studying the USMCA why not post some tidbits on some of the worst parts?

Of course there’s more than one gang.

Conservatives are doing little to nothing, which means they aren’t seeing what’s really happening, are scared, waiting for Trump to save them, or a host of other things.

How many times do I have to post MORE than tidbits. Gary made a video that just scratches the surface. He put this together right after we read the entire Agreement over T’giving weekend 2018, so, here you go… 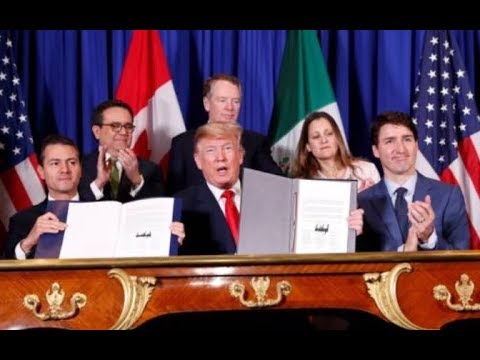 Thanks! It’s just as I posted many times before we are on the cusp of a New American civil war. So, is Biden our saviour?

Nobody is going to save us except us.
I still reference the terror TPTB have of us all deciding to do a “Sri Lanka” on them and maintain that’s why Dr.'s video with DJ was removed. They do not want us “gathering together” under any circumstances.

Too late for that… We are ‘saving’ ourselves, it’s just that most folks around here are mostly keyboard warriors. Not a bad thing of course, but some folks are taking ‘action’.

Provide some more clues on the subject of his video with DJ that was removed. Probably already spoke about it years ago on The Byte Show, and we can still access those interviews.