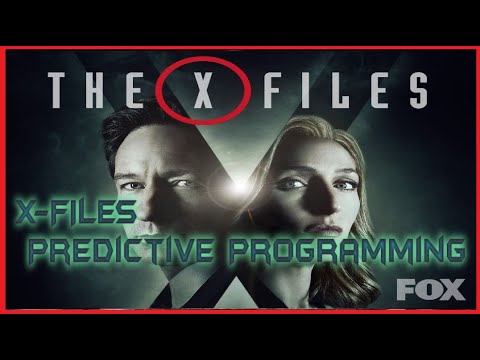 This incredible clip was brought to my attention through the Newspunch website that linked to Alex Jones on Infowars, but I decided to spare you people his hubris and self aggrandizement. It was also posted here before, but the link, also from YT, has been predictably scrubbed. Perhaps this one will be too, so a summary of this episode’s talking points may be in order, whether they were marching orders given through television or a dire warning, hidden in the niche of science fiction.

First, I thought it odd that of the prominent parts here, one, agent Einstein seems to be some sort of scientific “gate keeper,” labeling the independent journalist whistelblower an “internet lunatic.” A scientist is there to explain that it has been found that a genome has been put in everybody’s DNA, altering the course of evolution irreversibly. The Devil’s Advocate, agent Einstein, is labeling it as science fiction. I wonder who she is an “Agent” for and whose “homeland” the assumed Department of Security is for. “Nobody has the right or ability to tamper with your DNA” is her refuted rebuttal, but as we know CRISPR gene editing research was moved (handed off) to other countries while temporarily banned in the USA. The stated goal is to shut down our immune system here, something that seems to have come to pass for those who were injected with the experimental mRNA "vaccine’. The ladies then imply that it was these men that did this, calling it the Spartan virus analogous to the ancient Greek Spartan Horse Gift tale. Depopulation is named as the motive with the history on Eugenics in the USA gleaned over for those unaware, however, no mention of the Huxley’s, co-opted Stanford University, or its roots in England are mentioned. The media always puts the blame on the USA or Russia (China now) and its people as the scapegoat to divert attention, framing the victims for the crime as a rule.

A “red pilled” man then fills us in on the details of a shadow government hording technology and weaponizing it for 70 years, presumably waiting for this moment to fulfill the objective of its conspiracy. That, according to him, is corporate greed as well and the take over of America, the last obstacle in world domination as espoused by the Soviets under the Bolsheviks. Truth bombs then rain down. Engineered violence, cruelty, and drought caused by aerial contaminants with high altitude electromagnetic waves are exposed. Further, a state of perpetual war to create “problem/reaction/solution” scenarios (Hegelian dialectic) used to distract, enrage, and enslave Americans at home are given as part of the “protocols” of this hidden cabal. Meanwhile legislation is enacted to undermine the protections of the constitution in the name of “national security.” Prison camps and the militarization of police worldwide are predictably mentioned. “Executive capture” is revealed to be hidden behind new government agencies with no stated purpose, coinciding with corporate take over of food, agriculture, pharmaceuticals, and healthcare (medicine.) Even the military, we are alarmed to learn, is part of this and has been working with this evil to, in part, dull, fatten, and en sicken the consumerist, class obsessed US population before the kill. We are to believe a mass surveillance police state based around slavery of the drugged and micro-chipped minds of people (treated like animals in modern, big, industrial factory farms) is around the corner. This is the plan for the future if we are to ingest this prophetic piece of television "programming. "

The end game, apparently, is military take over by technological superior “elites” that “cull,” kill, and select from the “chosen.” This part
is to happen on a Friday, we learn, where first, the internet that we have come to depend on so dearly, goes down along with digital currency in a massive theft. Then, we are informed by the lead actor that strategic electromagnetic pulse bombs will wipe out are power grid ensuring the slave master “breakaway civilization” technological military superiority far into the dystopian future.

Of course we are lead to believe its the Russians that are to blame and not that some supra government in all countries is controlling the world already. Strange how this scenario resembles prophetic scripture written a long time ago.

note: The tag is “viral” in the literal sense, not in the new definition of the computer age. That piece or word-smithing was perhaps programmed into the “collective unconscious” (Michael Hoffman, “Psychological Warfare and Secret Societies”) as a means of soft disclosure using the “revelation of the method” to condition the the brain for the trauma that was about to be unleashed by a conspiracy on the world population. This is like a spider that first injects a poison anesthetic to numb the wound before feasting on the blood so that you are not aware and cannot defend yourself.

But will it succeed?

Not with me they won’t succeed.

It’s what you don’t know that gets you.
Also, spiders don’t use anaesthetic.

I find it interesting that the german term for homeland( or beLonging-place) is Heimat. So why is Die Heimat feminine gender while Der Vaterland is masculine gender? Could it be because the origin, the father of DHS is in Germany??

Unquaxed and un-x-filed here, I am sure the phenomenon of predictive programming is a thing and is actively being used as a propaganda technique against the complacent masses.

So the obvious question is how do the un-quaxed regain the higher ground of intellectual debate without access to these Hollywood and MSM outlets like TV mini series, mainstream media documentaries etc…

I think the challenge is to find a way of spreading old fashioned logical argument upon current cultural devices like memes for example.

My own observation is that although I don’t think we (we being those that choose traditional scientific methodology over fact checkers) have won the argument conclusively I do believe we are catching the ear of a much larger audience and perhaps that is as much as we can do right now.

Socrates didn’t do mass media or get vaxed, try his method when speaking with people. One can learn much by asking questions and simply listening to others.

Could it be because the origin, the father of DHS is in Germany??

Germany isn’t the only country that speaks German.

propaganda technique against the complaciant masses.

Seems like those who will comply do sooner or later regardless of what they know or have been told. Those who think outside that box, will be attacked. Think about Breggian (sp) and Malone situation. Bregin is thinking and talking outside the mind agenda. Some see it; others don’t want to; others …

One seed at a time.
First, we take Manhattan…

I stand corrected. Maybe I was thinking of mosquitoes.

Anyways, I think their power lies in subverting the next generation that does not question authority and accepts the current paradigm or status quo as “normal” thus “normalization” as Yuri Bresmenov put it. TV was invented in Germany if I am not mistaken, although I don’t blame them, and there are patents for its use in mind control using the cathode ray tube.

When I was 5 I remember my Dad taking the TV to the end of the garden and putting a pitch fork through it. He was a bit full on my old man, got quite heavily into scripture and was in particularly righteous old testament mood that night.

Us kids were crying and felt like it was the end of the world, what would we do without sesame street the next morning?

Man, how things change, wish I could buy him a beer and tell him I get it now.

In the early '90s on the internet, we had a saying, “kill your tv before it kills you”.

Its weird to think of that pre video era, certainly before my time but I can imagine despite radio bringing immediacy to media distribution you still had to be using your brain to imagine what was being described.

The hypnotic element of the CRT had not quite taken hold of the human psyche.

Perhaps there is some kind of correlation between the time TV really got going in the 60s and the decline in checks and balances against undemocratic government corruption, who knows?

When I purchased my current home six years ago the owner worked for Spectrum, the local cable television company. He had a flatscreen television on the wall in every room in the house except the bathrooms.
I don’t watch or own a television. Dismantling the wires and patching the holes was quite a chore. Every month I receive a promotion in the mail from Spectrum to connect, in the trash they go. They will not give up!

Ahhh-hhh-yes, the X-Files. A great place to develop a love for a well-planned conspiracy that is foiled by the ‘good’ guys. After years of watching these TV series, it would be a good idea to re-visit this one. Two other great TV series are Person of Interest, and the Mentalist. Pay attention to the credits, and you will note there is a good mix of script writers who were most likely selected because they notice stuff that appear to be conspiracies. The world revolves around unending wars and conspiracies.

Hey, I just did a quick search online for the older patent and this newer one came up. Its very interesting.

At a glance, this looks like a really good article that does cite scripture and so I can see where your dad was coming from.

“Physiological effects have been observed in a human subject in response to stimulation of the skin with weak electromagnetic fields that are pulsed with certain frequencies near ½ Hz or 2.4 Hz, such as to excite a sensory resonance. Many computer monitors and TV tubes, when displaying pulsed images, emit pulsed electromagnetic fields of sufficient amplitudes to cause such excitation. It is therefore possible to manipulate the nervous system of a subject by pulsing images displayed on a nearby computer monitor or TV set. For the latter, the image pulsing may be imbedded in the program material, or it may be overlaid by modulating a video stream, either as an RF signal or as a video signal. The image displayed on a computer monitor may be pulsed effectively by a simple computer program. For certain monitors, pulsed electromagnetic fields capable of exciting sensory resonances in nearby subjects may be generated even as the displayed images are pulsed with subliminal intensity.”

Notice how they say it can work with radio signals too. Every time I turn around there is a new wireless tower(5G) and they try to hide them in lamp posts or even fake trees like in Bend, OR.

So it’s operating on many levels simultaneously it seems.

No wonder the medium is the message.